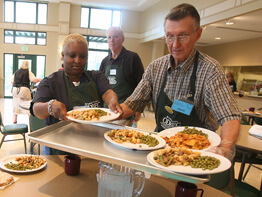 WASHINGTON – The number of Americans living in poverty went down slightly last year, according to the Census Bureau’s annual report, but the number of uninsured Americans rose a bit.

The dip in the poverty rate – the first this decade – brought the percentage of Americans living in poverty from 12.6 percent in 2005 to 12.3 percent in 2006. The number of people in poverty – 36.5 million – was “not statistically different” from 2005 levels, the Census Bureau said in an announcement. The child poverty rate stayed the same, at 17.4 percent, while the poverty rates for adults and senior citizens declined.

Both the number and percentage of Americans without health insurance rose from year-before levels – from 44.8 million to 47 million, and from 15.3 percent uninsured to 15.8 percent. The number of uninsured children increased from 8 million, or 10.9 percent in 2005, to 8.7 million, or 11.7 percent, last year.

“Catholic Charities USA is extremely troubled that the number of uninsured, including children, continues to increase,” said Father Larry Snyder, the organization’s president, in a statement issued shortly after the numbers were released Aug. 28. “We firmly believe that there is no excuse for any child in our nation to go without access to health care, which is critically important to the well-being and development of all children.”

In a separate statement Aug. 28, Sister Carol Keehan, a Daughter of Charity who is president and CEO of the Catholic Health Association, decried the fact that “in a supposedly strong economy, millions of people are still struggling for life’s basic necessities, including health care.”

“Whether we are talking about children, minorities, or middle-class parents working hard to provide for their families, millions of people are being left out of our health care system,” she added. “This is unforgivable and embarrassing for our nation.”

While household income increased – by 0.7 percent in 2006 – for the second year in a row, American income has yet to match its 1999 peak, said David Johnson, head of the Census Bureau’s Household and Household Statistics Division, during an Aug. 28 teleconference.

Even though household income is up, individuals’ earnings are lower. The disparity, Johnson said, is “mainly driven by the fact that there are more full-time, year-round workers in the country.”

“Any time the poverty rate decreases, we should celebrate,” Father Snyder said in his statement.
“However, we must never lose sight of the fact that in one of the world’s wealthiest nations, 36.5 million people living in poverty, including 12.8 million children, continue to struggle to make ends meet.”

Among large cities of 250,000 or more population, the highest poverty rates were recorded in Detroit, Cincinnati, Cleveland, Miami, St. Louis and Buffalo, N.Y. The lowest percentage of people in poverty in big cities was in Plano, Texas.

Women have historically earned less than men for comparable work, a finding that held true for all 50 states in the Census Bureau report. However, in the District of Columbia, “there was no statistical difference between the earnings of men and women,” the report said.

Father Snyder said “it is critical that both the House and Senate take real steps to help those living in poverty” when Congress returns from its August recess.

“It’s time for Congress to get to work and find the political will needed to make poverty a top agenda item and help the most vulnerable in our nation,” he said. Legislative priorities he listed included expanding the State Children’s Health Insurance Program, affordable housing, Head Start and a farm bill that makes it easier to qualify for federal food stamps.

The annual report by the Census Bureau includes details on every metropolitan area of at least 65,000 and takes in every congressional district.