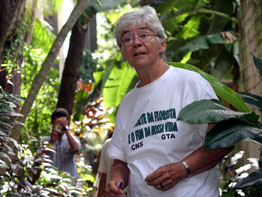 UNITED NATIONS – A U.S. nun who was murdered in 2005 while she worked to defend the rights of poor farmers in the Brazilian Amazon region has been named a recipient of a prestigious U.N. human rights prize.

Sister Dorothy Stang, who was a Sister of Notre Dame de Namur, is one of seven recipients of the U.N. Prize in the Field of Human Rights, awarded by the General Assembly every five years.

The awards were to be presented at a ceremony in New York on International Human Rights Day, Dec. 10, to mark the 60th anniversary of the adoption of the Universal Declaration of Human Rights. Sister Dorothy’s brother, David Stang of Colorado, was to represent her family at the ceremony, and Sister Jane Burke, who represents the Sisters of Notre Dame de Namur at the United Nations, was to accept the prize on behalf of the order.

In a Dec. 4 statement, the Sisters of Notre Dame de Namur expressed gratitude that Sister Dorothy was being honored with the award.

“Through her life and teaching, many people learned to appreciate and claim their human rights,” the statement said. “Since her martyrdom …, Dorothy’s message, service and convictions resound around the world, drawing attention to the circumstances in the Brazilian Amazon.”

A U.N. announcement said the prize “is an opportunity not only to give public recognition to the achievements of the recipients themselves, but also to send a clear message to human rights defenders the world over that the international community is grateful for, and supports, their tireless efforts to promote human rights for all.”

Sister Dorothy’s death sparked an international outcry. She was killed Feb.12, 2005, in Anapu, a remote community in the Amazon region. She was shot several times in the chest and head. She was 73 years old.

For nearly four decades, Sister Dorothy, a native of Dayton, Ohio, and a naturalized Brazilian citizen, worked in rural Brazil, defending the rights of poor peasants. This fight made her many enemies, including some wealthy landowners. Shortly before her death, the town of Anapu declared her “persona non grata,” stating her work was hindering the region’s development.

In her book titled “Martyr of the Amazon,” published by Orbis Books in 2007, author Rosanne Murphy recounted that Sister Dorothy’s lifelong dream of mission work became a reality in 1966, when she was one of five sisters from her order sent to Brazil following an appeal by Pope John XXIII.