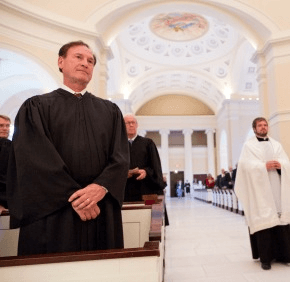 By Maria Wiering
mwiering@CatholicReview.org
Supreme Court Justice Samuel A. Alito Jr. linked the virtues of St. Thomas More to being a good lawyer in a speech before a gathering of Catholic legal professionals Oct. 30.
“It is important for us to remember that it is not only possible to be a very good lawyer and also a good person, but this is in fact what we are called to do,” he said. “St. Thomas More provides us with an example.”
The St. Thomas More Society of Maryland honored Alito with its 2014 Man for All Seasons Award. Alito and his wife, Martha-Ann, attended the Catholic legal society’s annual Red Mass before speaking at a banquet at the Historic Grand Venue on Charles Street.
Archbishop William E. Lori presided at the Red Mass, an annual liturgy for legal professionals. About 200 people, including 15 judges, attended the Mass.
As chairman of the U.S. Conference of Catholic Bishops’ Ad Hoc Committee on Religious Liberty, Archbishop Lori has been addressing challenges to religious freedom in employment, licensure, accreditation, and free speech and assembly.
“In one way or another, all of us are about defending freedom,” he told the lawyers in his homily. “You may or may not be directly involved in constitutional law, but you carry out your daily work with the conviction that we are a nation of laws that guarantees the fundamental freedoms which many people take for granted.”
God’s servant first
In his remarks, Alito thanked the group for the award, signified by a framed portrait of St. Thomas More. He said he planned to display it “proudly” in his office.
In a 35-minute speech ripe with humor and insight, he asked what 21st century Americans and attorneys might learn from the 16th-century lawyer and English statesman for whom the award is named.
A lawyer and political philosopher, St. Thomas More was Lord Chancellor of England during the reign of King Henry VIII. In addition to his eventual martyrdom, he is known for authoring “Utopia” – in which, Alito quipped, he did not include lawyers.
While St. Thomas More was chancellor, the king petitioned to Pope Clement VII to annul his marriage to Catherine of Aragon, but it was not granted. Instead of complying, the king broke ties with the Roman Catholic Church and declared himself head of the Church of England. It became treasonous for anyone to reject his new role.
A devout Catholic,  St. Thomas More refused to recognize King Henry as the head of the Church of England and his subsequent marriage to Anne Boleyn. St. Thomas More resigned as chancellor in 1532. He was tried for treason and was beheaded in 1535 at age 57. On the scaffold, he said, “I die the King’s good servant, but God’s first.”
St. Thomas More was both a saint and excellent lawyer – two identities rarely combined, Alito said, pointing to jokes where the punchline is that no lawyers are in heaven.
Some lawyers like the “tough guy” reputation, he said, but shouldn’t “get carried away” with the image.
“Being a good lawyer and a good person is not a case of having multiple personalities,” he said. “All of our work as lawyers should contribute to the public good.”
Church and state
Alito also spoke on the relationship between conscience and the state, higher law and religious intolerance.
St. Thomas More has become a symbol of the primacy of individual conscience, Alito said, since he refused to violate his to conform to the will of the state.
“One of the great contributions not sufficiently recognized in modern times of Christianity to political thought is the idea that the legitimate authority of the state is limited,” he said, pointing to Jesus’ words in Mark 12:17: “Repay to Caesar what belongs to Caesar, and to God what belongs to God.”
“In the west, until roughly the time of St. Thomas More, the church represented an authority separate from the state,” Alito said. “It is still, in the western mind, the idea of limited government. That idea is fundamental to the freedoms that we cherish.”
The American founders understood that freedom wouldn’t be possible unless government was limited, Alito said, and that government cannot be counted on to limit itself. People with power are tempted to increase it.
St. Thomas More understood that God’s law is higher than enacted law, Alito said – an idea shared by America’s Founding Fathers and evident in language in the Declaration of Independence.
“There’s an anomaly about our current situation,” Alito said. “While a great many people believe very strongly that there are rights that government must respect, our understanding of the source of those rights has been obscured. That we understand that they come from our creator has become obscure, and it’s questionable as to whether they’ll be able to endure without their historical roots.”
On religious intolerance, Alito recalled the persecution Catholics experienced in Europe and colonial America, and the importance the Founding Fathers placed on religious liberty and legislative efforts to bolster it.
Despite these efforts, religious liberty cannot be taken for granted, he said.
“Religious liberty and other freedoms are never entirely secure,” he said. “New challenges have emerged in recent years, more are likely in the future. Therefore, it is vitally important for our country to remain true to the inspiring vision of religious liberty that animated the most perceptive of our founders.”
Also see:
Archbishop Lori: Hobby Lobby ruling ‘a wonderful victory’
Be ready with God’s weaponry, devil is real, pope says
PrevNext