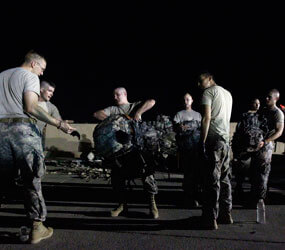 VATICAN CITY – The United States has a duty to leave behind peace, not chaos, when troops are finally withdrawn from Iraq, said an Iraqi bishop.

“We desire, we ask, and we scream for peace and security,” Chaldean Auxiliary Bishop Shlemon Warduni of Baghdad said in an interview with Vatican Radio Aug. 19.

U.S. combat troops are scheduled to leave Iraq at the end of the month, formally ending Operation Iraqi Freedom. About 50,000 U.S. troops will remain in Iraq until the end of 2011 to continue training and assisting Iraqi security forces.

Bishop Warduni said war does nothing but destroy everything.

“There are no jobs, there are car bombs, kamikaze attacks and other acts of violence. If foreign troops leave, they have a duty to leave peace and security behind them,” he said.

He also expressed concern about the political deadlock between Iraqi leaders who have not been able to form a government since parliamentary elections in March.

“It’s very difficult to live somewhere where there is no law and no government,” he said, adding that terrorist elements have been taking advantage of the lack of a stable central authority.

“The terrorists come and go as they please,” he said.

Overturning the dictatorial regime of Saddam Hussein in order to put democracy in its place did not work, said the Iraqi bishop.

“Democracy needs to be taught, it needs to be planted, not imported,” he said. He compared life in Iraq under Saddam as like living “in a huge jail.”

“And what happens when a prison is suddenly thrown open?” he asked. It is like a dam that opens without warning and unleashes huge waves of destruction, he said.

The only way for Iraq to begin anew is for all sides to set aside their partisan interests and focus on what is best for Iraq as a whole, he said.

The country needs to create a strong stable government that enforces the law, he said, and Iraqis need the assistance of the whole world “to help snuff out the wars.”

Meanwhile, Iraq’s new ambassador to the Vatican, Habbeb Mohammed Hadi Ali al-Sadr, said once Iraqi forces are able to guarantee greater security, then normalcy and the rebuilding of the nation can begin with help, cooperation and investments from Western countries. The ambassador spoke at a July 14 press event in Rome.

The Iraqi government has been looking for ways to work with the Vatican and has expressed hope for a visit by Pope Benedict XVI to Iraq, he said. One Vatican source, however, told Catholic News Service Aug. 20 that a papal visit was very unlikely, especially given the precarious security in the region.

Al-Sadr said the government has taken steps to preserve Iraq’s Christian heritage and culture. Every year about a dozen men are sent to Rome to further their education as priests, and the country wants to promote religious tourism, specifically a pilgrimage to the birthplace of Abraham in Ur, he said.

The ambassador, who met with Pope Benedict July 2 when he presented his diplomatic credentials in a private audience, said he asked the pope to urge Christians who have fled the country to return to Iraq.

He said Iraqi Christians have an important role to play in the cultural, technological and economic progress of the country.

“Iraq, in its revival, cannot do it without them,” he said.

To help facilitate their return, he said the government is committed to finding them employment, providing land on which to build a home and offering the equivalent to $1,300 in Iraqi currency.

There is no campaign of “religious extermination” against Christians because, if there were, Christians would be the only ones facing attacks, he said.

“The terrorists attack all Iraqis indiscriminately,” he said.

Al-Sadr said terrorist elements are coming from outside of Iraq, and they only added Christians to their hit lists because an act of terror against Christians gets more media attention than killing Muslims.

In this way, “without realizing it, the mass media and Western organizations have supported the terrorists’ ploy,” he said.