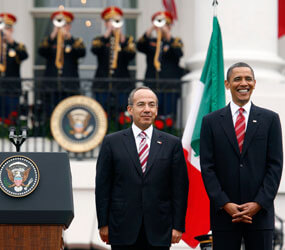 WASHINGTON – As the presidents of the United States and Mexico declared their intentions to work together on immigration-related problems and other issues, the bishops who head the migration committees of the two nations called on them to critically examine their immigration policies “and their adverse impact on human beings.”

In prepared statements at the White House Rose Garden May 19, Presidents Barack Obama and Felipe Calderon noted that in earlier talks that day, the two had paid special attention to migration issues, particularly the recently passed Arizona law which, among other provisions, requires officers to arrest those they encounter in the course of police work if they are not able to provide documentation of their legal status.

Both Obama and Calderon criticized the law and said they would work to address border-related problems, including drug and human smuggling. Other topics of the presidents’ talks included trade, the environment, hemispheric cooperation and battling crime.

In a statement released by the U.S. Conference of Catholic Bishops and the Mexican Episcopal Conference, Bishop John C. Wester of Salt Lake City, who heads the U.S. bishops’ migration committee, and Bishop Rafael Romo Munoz of Tijuana, Mexico, who heads the Mexican’ bishops’ migration commission, said that while they “respect the obligation of both countries to ensure the integrity of their borders and the security of their peoples, we believe they can achieve these goals without sacrificing the basic human dignity and rights of the migrant.”

The bishops had advice for both countries, urging the United States to make comprehensive immigration reform legislation a priority, to deal with an inadequate number of visas and legal options for immigrants to work in the United States, to prevent exploitation by human smugglers and bring undocumented migrants out of the shadows of society.

They said the Mexican government must ensure that migrants are not abused and subject to exploitation by criminals and corrupt officials. “More attention should be paid to the creation of living-wage employment for low-skilled workers, so that they can stay at home and support their families in dignity,” the bishops’ statement said. “This would help reduce illegal immigration over the long term, a goal which both nations share.”

The bishops said repairing immigration laws in both countries would take migrants out of the complicated border situation that includes drug and human smuggling and puts citizens of both countries at risk. That would in turn “permit law enforcement to focus their limited resources on criminal networks,” the bishops said.

While the two presidents were meeting at the White House, their wives, Margarita Zavala and Michelle Obama, were visiting a Silver Spring, Md., primary school that has a sister school in Mexico and a large population of Latin American immigrants and children of immigrants.

While the first ladies’ activities there focused on healthy eating and exercise, one child brought up worries about immigration, telling Michelle Obama that her mother said, “That Barack Obama is taking everybody away that doesn’t have papers.”

As the U.S. first lady responded, saying, “That’s something that we have to work on, right, to make sure that people can be here with the right kind of papers,” the girl added that her mother doesn’t have papers.