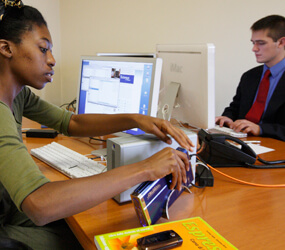 VATICAN CITY – In a truly win-win arrangement, a group of U.S. university students get amazing access to the Vatican and the Vatican gets an enthusiastic, computer-savvy volunteer workforce.

Since 2004, students from Villanova University in Pennsylvania have worked alongside cardinals and priests as part of the university’s Vatican Internship Program.

The students have contributed to groundbreaking projects such as the launch of the Vatican’s YouTube channel and the virtual tour of the Basilica of St. John Lateran. They have helped usher the Vatican into the digital age by using new technology to spread its message – something one Vatican official said older Vatican employees have a hard time doing.

“It is fair to say that most of us in the office are what you would call ‘digital immigrants’ who have come late to the digital age,” said Monsignor Paul Tighe, secretary of the Pontifical Council for Social Communications. “It is a great help to have a few ‘digital natives.’ It is a great help for us to have that younger life around the place – people who are very much at home with thinking about new technologies.”

After the normal visiting hours, the interns had exclusive access to the Sistine Chapel while helping create a virtual tour of the chapel for the Vatican Web site. They assisted Villanova professors in photographing the Sistine, mainly by moving the signs and velvet ropes that got in the way of the pictures.

“Before coming to Rome I was told that the crowd and noise takes away from the experience of seeing the chapel,” said Greg Doerfler, an intern at the Vatican’s Internet Office. “That was not the case for us. We were able to do some things that visitors never get to do like go into the Room of Tears,” a small chamber alongside the chapel where a newly elected pope first dons his new white cassock.

The interns spent more than eight hours in the chapel over three nights of shooting. During their down time, the interns listened to impromptu lectures on the chapel’s frescos given by Villanova professor Frank Klassner, who provided technical assistance in the development of the virtual tours. But they also used their breaks in the chapel to finish some of their homework.

While working for the Pontifical Council for Social Communications, intern Cristin Parise was invited to attend the pope’s weekly general audience.

“The papal audiences were incredible,” Parise said. “I got to sit with a handful of journalists and was almost face to face with the pope. The first time I went I was texting all of my friends and family during the audience.”

Now, more than two months into her internship, she has grown accustomed to working in the Vatican. “At first it was a little strange, people in the office are from all over the world,” she said, adding that “working with priests and cardinals is not really a big deal anymore.”

“It’s very exciting to see the pictures I took up on the Vatican Web site,” West said. “They will allow more people to see the beauty of St. John’s.”

She’s such a fan of the basilica, the cathedral of the Diocese of Rome, that she was not reluctant to admit that she prefers St. John Lateran to St. Peter’s.

Many of the interns faced the challenge of working through language and culture barriers. Doerfler and Tom Carpenter, another intern at the Vatican’s Internet Office, are programming software that will organize a timeline of the office’s numerous projects and hopefully will increase productivity.

The two American interns are supervised by an Argentine monsignor who mainly speaks Italian and Spanish. In fact only a handful of the office’s employees are English speakers. The two interns can use only the present tense in Italian and have a limited vocabulary. To say the least, some things get lost in translation.

“I don’t know when he (the monsignor) is joking or when he is serious,” Carpenter said. “It’s been tough dealing with the language barrier, but it has helped me communicate better with people and it’s forced me to work on my Italian.”

“Carpenter and Doerfler are very smart,” said Davide Coluccini, systems engineer and project manager for the Vatican’s Internet Office. “They continue working even when there is a problem. When they are stuck, they find other parts of the project to move on to.”

He sees the Vatican internship as an “I give, you give” type of experience – the Vatican gives the interns access to state-of-the-art technology, while the interns complete projects for the Internet Office.