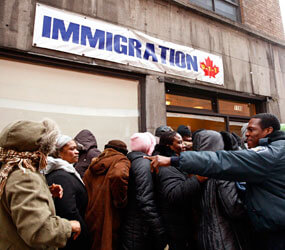 WASHINGTON – With Haitians who survived the devastating Jan. 12 earthquake beginning to look for new places to live, the U.S. is easing immigration restrictions for some Haitians, including those who were here illegally before the quake and orphans.

Meanwhile, aid agencies are beginning to look at how to handle the potential movement of thousands or even hundreds of thousands of displaced people who may try to settle in other countries in the region.

The crisis prompted Homeland Security Secretary Janet Napolitano to grant temporary protected status to Haitians who are in the United States, enabling those who qualify to legally remain in the U.S. and work here, even if they previously were in the country illegally. Napolitano also announced Jan. 17 a policy that will allow some orphaned Haitian children to more easily be resettled in the U.S.

The crisis also has led aid organizations to begin planning for the possibility that many Haitians will decide to leave their battered homeland, whether through organized resettlement programs or on their own. Previous political and economic crises prompted tens of thousands of Haitians to flee their country in boats. In the 1990s, many ended up living in tents at the U.S. Navy base at Guantanamo Bay, Cuba.

Within a day of the magnitude 7 earthquake, as images of the destruction of the capital city Port-au-Prince dominated the news, Napolitano announced that deportations to Haiti were being suspended. By the end of the week, she had authorized temporary protected status, which will enable between 100,000 and 200,000 Haitians who are currently in the U.S. illegally to remain here and legally hold jobs.

Shaina Aber, associate advocacy director for Jesuit Refugee Service/USA, said that as of summer 2009, there were about 35,000 Haitians in the United States who have final orders to be deported. That means they’re just waiting for the paperwork and final arrangements that would send them home. Of those about 600 are being detained, she said.

Advocates for immigrants, including the U.S. Conference of Catholic Bishops, have long advocated that temporary protected status be extended to Haitians because of the country’s fragile situation. Such status has been available to certain citizens of El Salvador, Honduras, Nicaragua, Somalia and Sudan, whose home countries have been severely affected by war or natural disasters. Typically, the duration of that status is extended if there is no significant improvement in the home country. Napolitano initially granted the status for Haitians for 18 months.

Archbishop John C. Favalora of Miami, which has a large Haitian population, was among those calling on President Barack Obama to grant such status to all Haitians in the United States.

In a Jan. 13 statement, he said any attempt to repatriate Haitians “would be to send them to a country in crisis and would certainly condemn them to probable, if not certain, death. This would be grossly inhumane and immoral on the part of the United States.”

He urged people to contact the president and their representatives in Congress and ask for immediate action “for the sake of the welfare of the Haitian community in the United States as well as in Haiti.”

The lengthy list of those calling for temporary protected status for Haitians included members of Congress from both political parties, human rights and immigrant rights organizations and a wide assortment of faith groups.

With an estimated one-third of Haiti’s population of 9 million people affected in some way by the earthquake, some very quickly made their way to the nearest foreign country, the Dominican Republic, which shares the island of Hispaniola with Haiti.

The Dominican government closed the border Jan 13. It was reopened several days later and Haitians began to seek medical care and live in makeshift encampments near the border. Jesuit Refugee Service workers near the border were making arrangements to provide some basic services for Haitians who might end up stranded there, said Aber.
At least 200,000 Haitians are in the Dominican Republic, she said, and some people estimate the number is actually more like 2 million. The Dominican government recently militarized much of the border, Aber said, and part of what the Jesuit organization’s staff will be doing is monitoring to be sure troops on the border “don’t overreact.”

Erol Kekic, immigration and refugee director for Church World Service, a partnership of dozens of Christian churches, said arrangements were being made with Haitian communities around the United States to potentially house incoming people from Haiti.

In Florida, the Catholic Archdiocese of Miami announced that it “stands ready to receive, house and find permanent homes for Haitian children who may have been orphaned by the disaster; similar to what was done for Cubans in the 1960s.”

In an operation known as Pedro Pan in the 1960s, the Catholic Church in Miami helped resettle 14,000 Cuban children who were sent from their homeland by their parents to get them away from that country’s political strife. They later were reunited with their families as their parents were able to emigrate from Cuba.

Teresa Martinez, a spokeswoman for the Archdiocese of Miami told Catholic News Service Jan. 19 that the new orphan resettlement program, being called Pierre Pan, was expected to be approved by the U.S. government soon. Meanwhile, the archdiocese was fielding calls, e-mails and Web postings from people around the country offering to take in Haitian children, either temporarily or to adopt them.

Kekic said Church World Service also was considering the possibility that the U.S. government may decide to provide temporary housing for Haitians in an off-shore location, such as at the Guantanamo base. “That’s definitely a possibility,” he said.

The base is currently home to detention facilities for terrorism suspects, which the Obama administration is slowly closing. The detention center covers a small portion of the 45-square-mile base.

Other countries also will likely see a flow of Haitians, but Kekic said few in the region are able to accommodate their needs.

Kekic said in the last decade several South American nations have developed strong refugee resettlement programs, a first for the region. But whether Brazil, Argentina and Chile are able to deal with people fleeing on their own from a natural disaster, as opposed to refugees who are screened and assisted through the process by international agencies, remains to be seen, he said.