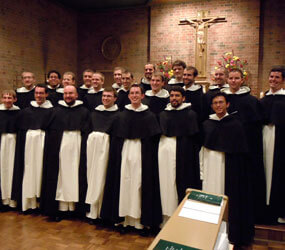 WASHINGTON – Statistics show a drastic fall in the number of people entering religious life since the 1960s, yet during ceremonies Aug. 7, the Dominican Province of St. Joseph formally accepted 21 men as novices – the province’s largest novitiate class since 1966.

Father Bill Garrot is the province’s outgoing vocations director. He is the man who the current vocations director appointed this summer, Father Benedict Croell, said played a key role in the “harvest” that yielded the 21 novices, who received the Dominican habit during an ancient ceremony called “vestition” at St. Gertrude’s Priory in Cincinnati.

In response to dismal novitiate numbers, in 2003 the Province of St. Joseph decided to hire Father Garrot as a full-time vocations director to engage in more rigorous recruitment efforts than a part-time director could.

Before Father Garrot was appointed, the province had suffered through “chaotic period” from 1993 to 2002, where the province transitioned between three or four different vocations directors and novitiate numbers were about five per year.

“This kind of woke everybody up,” Father Garrot said in an interview with Catholic News Service in Washington at the New York-based province’s House of Studies.

“Stability in a vocation program does matter. I was appointed as a full-time vocations director, but not many diocese or religious orders seem to have the luxury of appointing a man to do full-time recruitment work,” he said.

He admitted that his efforts have played a part in bringing such a large class to the province, but, the biggest factor has been the Dominican’s theological tradition, much of which is rooted in the teachings of St. Thomas Aquinas, Father Garrot said.

“There has been talk among some that the Second Vatican Council represented a break with the past and the introduction of something completely new for the church,” he said. “It’s a shift, there’s renewal, there are graces given, the Holy Spirit works and raises up new things – but there’s still continuity here. And the Dominicans are the beneficiaries of their own continuity – of 800 years.”

Despite efforts in other Catholic orders since the council to alter their own traditions and teachings with the aim of appealing to a younger, wider audience, for the Province of St. Joseph, “there was not a whole lot of toying or monkeying with the liturgy,” Father Garrot said, adding that he thinks some other orders have actually hurt their recruitment efforts by straying from their tradition.

“All I can hope is that we’re riding the crest of what will happen for everyone else in due time as they reclaim their tradition and settle,” he said.

Communal prayer and the wearing of religious habits are traditional aspects of Dominican life, for example, that Father Garrot said attracted many of the novices, who are to take their first vows in a year.

The current vocations director, Father Croell said that the traditional attracts men because “we’re living in uncertain times right now, very secular times, and there’s a number of factors that young men are looking for.”

Aside from its size, the novitiate class is special in several others ways, according to those familiar with the novices.

Members of the class are younger than usual, ranging from ages 22-30, with an average age of 24, whereas most classes range from ages 22-42, with an average age of 27. Also, many of the novices have graduated from college within the past year. In past novitiate classes, the province has typically averaged two people who just graduated from college, but this group has 11. Father Garrot noted that overall the class is “highly educated” and mentioned that three of the men are coming to the order with doctorate degrees.

Juan Carmona, 30, a Harvard graduate, holds one of those doctorates – in cell and developmental biology. He came to the United States from Mexico when he was 7 years old.

Carmona was attracted to the Dominicans because of “the great emphasis that they place on education and making sense of the world,” he said.

“In today’s world you have learning for the sake of learning and you have an empty self glorifying experience. The human person is elevated but there’s no transcendent truth,” he told CNS. “What (this class) has in common is a great desire to serve the church and a great desire to really help souls and a great passion for learning the truths of the faith and teaching that to people.”
Santiago Rosado, 22, studied theology at the University of Notre Dame in Indiana. He became interested in the priesthood in high school, but where he was, there were no men religious to serve as an example, he said. After considering life as a diocesan priest, Rosado decided that belonging to a religious community was preferable to “being alone in a parish.”

“Having those brothers there as resources and support was something that initially attracted me,” he said.

He met a Dominican priest studying for his doctorate at Notre Dame who encouraged him to join the Dominicans. Rosado was already familiar with the teaching of St. Thomas Aquinas from his studies and found himself pulled by the “diversity of thought” within the Dominican intellectual tradition.

Michael Weibley, 22, graduated from Walsh University in Ohio in May before becoming a Dominican novice.

He said for his first few years at Walsh, he “fell away from his faith.” College life, including academics, “a lot of partying” and being on the baseball team, were all distractions from his faith he said. That was until toward the end of this sophomore year he realized he wasn’t really happy and began looking for what was going to make him happy in life.

“I started asking the hard questions,” he said.

Weibley, who was raised Catholic, found himself returning to the church.

He said being on his university baseball team helped him draw parallels to the fraternal life of a Dominican friar and drew him to picking up a vocation. He was also pulled by the traditional aspects of Dominican life.

“The province really does what the church asks. They do what the Dominicans have taught to do throughout the years,” he said.

An earlier version of this Catholic News Service article incorrectly reported that the men had taken their first vows. The Catholic Review regrets the error.