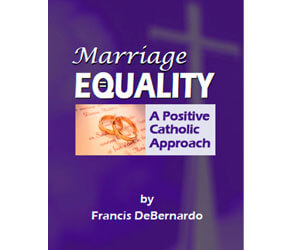 WASHINGTON – The publication of a recent booklet about a “Catholic approach” to same-sex marriage by New Ways Ministry prompted the chairmen of two bishops’ committees to reaffirm a year-old statement that the organization cannot be considered a Catholic group.

New Ways Ministry, based in Mount Rainier, a Maryland suburb of Washington, D.C., describes itself as a “gay-positive ministry of advocacy and justice for lesbian and gay Catholics and reconciliation within the larger Christian and civil communities.”

They said they wanted to reaffirm a statement made in February 2010 by Chicago Cardinal Francis E. George, then president of the U.S. Conference of Catholic Bishops, “and assure Catholics that in no manner is the position proposed by New Ways Ministry in conformity with Catholic teaching and in no manner is this organization authorized to speak on behalf of the Catholic Church or to identify itself as a Catholic organization.”

In his 2010 statement, Cardinal George denounced New Ways Ministry for its criticism of Catholic efforts to defend marriage as the union of one man and one woman and said it does not offer “an authentic interpretation of Catholic teaching.”

Since the founding of New Ways Ministry in 1977, he said, “serious questions have been raised about the group’s adherence to church teaching on homosexuality.”

“No one should be misled by the claim that New Ways Ministry provides an authentic interpretation of Catholic teaching and an authentic Catholic pastoral practice,” the cardinal said.

At the time, DeBernardo said in a statement posted on his organization’s website that the cardinal’s words “will not impede or slow us in our efforts to work for justice for lesbian/gay people in the church and society.”