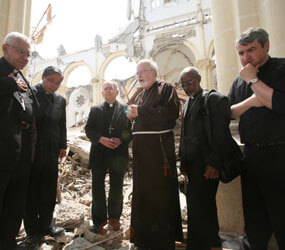 PORT-AU-PRINCE, Haiti – Walking around the massive tent city at the Petionville Club March 2, Archbishop Jose H. Gomez of San Antonio wondered what will become of the thousands of Haitians left homeless by the Jan. 12 earthquake.

For Archbishop Gomez, the enormity of the tragedy was almost too much to comprehend.

“The (Haitian bishops) were telling me today that they think 300,000 are dead, but whatever the number the loss of life was huge,” Archbishop Gomez, chairman of the U.S. bishops’ Subcommittee on the Church in Latin America, told Catholic News Service.

The archbishop was in Haiti leading a three-day tour of the earthquake-damaged Haitian capital as part of an advisory group from the U.S. Conference of Catholic Bishops. The group’s task: Explore ways to help the Haitian church and the people of Haiti move forward after the quake.

“Besides (damage to) the structure of the whole archdiocese, losing the archbishop and the cathedral has created a vacuum and emptiness that (the bishops) are trying to fill with all of us in rebuilding the church,” he said at the conclusion of two intensive days of visits to damaged parishes, convents, seminaries, schools and hospitals.

“It has been an overwhelming experience for me while looking at the reality, but at the same time I am enthusiastic about the future and with prayers and solidarity the church in Haiti is going to flourish again,” Archbishop Gomez said.

In a meeting with Haitian bishops, the delegation discussed the importance of strengthening existing church institutions and developing new leadership as the church begins to rebuild, the archbishop said. The delegation also recommended that the bishops consider parishes as places for Haitians to come together as they rebuild their lives.

Bishop Gomez said the Americans urged the bishops to reopen Catholic schools as soon as possible and to resume the celebration of Mass, especially in tent camps around the city.

In their meeting with Preval, the U.S. bishops also stressed the importance of reopening schools as soon as possible. The Haitian government has said it did not want to reopen some schools while others remained closed.

At the Daughters of Mary, who lost 15 members in the earthquake, Cardinal O’Malley reminded the sisters at Mass that good can arise from the horrors of disaster. The mystery of suffering must result in something better for the people of Haiti, he said.

The seminary has been of particular concern for the Haitian bishops. About 20 seminarians – including about a dozen from the archdiocese and eight others – were killed in the earthquake.

Initially, the bishops considered postponing seminarian education and assigning students to pastoral duties at parishes around the city, Father Small explained. But they have reconsidered and decided to move forward with classes in a consolidated location elsewhere in the capital by mid-April.

“The bishops have agreed to have all the seminarians continue with their formation this year rather than send them to pastoral assignments, and that is sign that the church here is getting some support and confidence,” Father Small said. “Through the encouragement of the U.S. bishops they decided they do have what they need to stand up their formation and to find the shelter space for classes.”

Throughout the visit, Father Small said, the delegation perceived a sense of welcome among Haitians. He said the group often expressed a “constant urge to pray and express a common faith.”

“The main point here this week is that we talked about making sure they have enough capacity, so that management structures are available to the church in Haiti for what will be a multi-year reconstruction project,” Father Small said.