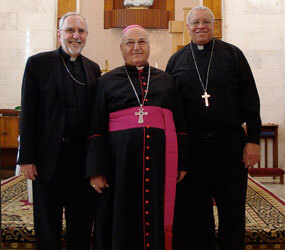 WASHINGTON – Iraqis want a return to peace, security and stability and the chance to secure meaningful employment, said two U.S. bishops who traveled to Baghdad in a demonstration of the American Catholic Church’s solidarity with the country’s violence-weary Christians.

Visiting Oct. 2-5 at the invitation of the bishops of Iraq, Bishop Gerald F. Kicanas of Tucson, Ariz., and Bishop George V. Murry of Youngstown, Ohio, found Iraqi Christians confronting immense daily challenges while facing the threat of violence because of their faith.

Iraqis, the bishops said, repeatedly stressed the need for security and urged the prelates to share their story with the American church and government officials.

“People were grateful that two bishops from the U.S. had made the trip and felt a great sense of solidarity by our presence,” said Bishop Kicanas, who visited in his position as chairman of the Catholic Relief Service board of directors.

The bishops also were in Iraq to help promote stronger collaboration among the various segments of the Catholic Church to help bolster the Christian presence in the country.

“Clearly to the extent that the church in Baghdad can speak with one voice and in a unified way will make more effective their ability to impact on the society,” Bishop Kicanas said. “There is a tremendous amount of good happening by the church in Iraq, but what seemed to be possibly even more helpful is that those efforts to be of service and to help would be more unified.”

The status of struggling Christians in Iraq was among the topics explored in meetings with Archbishop Giorgio Lingua, apostolic nuncio to Iraq and Jordan, Cardinal Emmanuel-Karim Delly, Chaldean patriarch, Chaldean Auxiliary Bishiop Shlemon Warduni and other Iraqi bishops.

Bishop Kicanas and Bishop Murry said church leaders are particularly concerned about the future of young Christians who strive to leave the country because they see no future in remaining.

“The sad reality is that the flight from Iraq by Christians leads to not stability and security but in fact leads to economic difficulty and marginalization,” Bishop Kicanas said. “The (Iraqi) bishops try to explain that leaving isn’t going to be paradise.”

In a country where heavily armed government and private security forces, 10-foot concrete walls and barbed wire barricades are the norm, the American bishops experienced the depth of security concerns Iraqis have throughout their visit. It became readily apparent to them while praying with Syriac Archbishop Athanase Matoka of Baghdad, retired archbishop of Baghdad, at the Syriac Catholic Church of Our Lady of Deliverance, where 58 people died in a brutal assault last Oct. 31.

“You still see vivid remains of the attack,” Bishop Kicanas said, describing the impression of a machine gun in the church ceiling left by the force of the explosion set off by one of the suicide bombers. “This was a defining moment for Christians realizing they weren’t safe in their own homes or their own churches.”

“It permeates everything there,” he said. “They go on with their lives, but this sense of the difficult situation these Christians are living, the lack of knowledge of what the future is going to be, they carry that around. In a sense they just live with it.”

The bishops also met with a priest who was kidnapped by one group, held for ransom and then released to a second group, which also demanded ransom before releasing him to his community.

Caritas Iraq’s programs serve a mix of Christians and Muslims while focusing on assistance for victims of violence, health care, aid to children with disabilities, skill development, peace building and reconciliation.

At one site, an imam was addressing a group of Christians, helping them understand the basic tenets of the Muslim faith, Bishop Kicanas said.

“A lot of good things are being done by Caritas in the service of people of great need,” he said.

Bishop Murry noted that about 80 percent of the people served by Caritas Iraq programs are Muslim.

The bishops also celebrated Mass with Bishop Warduni at the Chaldean Catholic Church of the Assumption and with Latin-rite Archbishop Jean Sleiman of Baghdad, and visited the small Armenian community led by Archbishop Emmanuel Dabbaghian of Baghdad.

Bishops Kicanas and Murry planned to share their findings with their fellow bishops at the USCCB’s Nov. 14-17 meeting in Baltimore, Catholic Relief Services and the U.S. State Department.

“We can be a voice to speak for the Iraqi Christians in the United States, to the other bishops and to the U.S. government,” Bishop Murry said. “We have a moral obligation to help those people find a home, help those find a home for those who want to return to the country and work with the Iraqi government so people want to stay and want to return.”