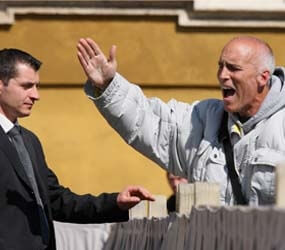 Eleven U.S. members of a group called The Vanguard of St. Catherine of Siena were in Rome March 17-24 to press for tougher church action against Catholic politicians who support legalized abortion.

Terry, who heads the Washington-based Operation Rescue Insurrecta Nex, said after nearly a week of knocking on doors and running into prelates in the streets around the Vatican that they succeeded in speaking with three cardinals, three bishops and “close to 10 priests.” They also spoke with an unspecified number of lay staff at a number of Vatican departments, he said.

Terry said during a March 23 press conference that he did not want to “give the names of those we have met with so that they don’t get backlash.”

Several Vatican officials who spoke to Catholic News Service on background said the members of their respective curial offices did not have time to meet with the group, and one official that did meet with them said “they were not officially received.”

Terry said U.S. supporters had sent Vatican officials about 200 faxes and that they had left their literature or sent it by courier to about 15 Vatican agencies as well as to the Vatican secretary of state, Cardinal Tarcisio Bertone.

In a brief demonstration outside of St. Peter’s Square March 22, Terry and six others held up posters written in Italian and English for about one minute. One sign called on Archbishop Donald W. Wuerl of Washington to excommunicate U.S. House Speaker Nancy Pelosi, while another read “No Communion for Pelosi.”

As a publicly practicing Catholic and a public opponent of efforts to make abortion illegal, Pelosi has come under sharp criticism by some bishops and other Catholics who believe that a politician who supports legalized abortion should not be allowed to receive Communion. The Baltimore native has supported programs to aid pregnant women and children, but has opposed restrictions on access to abortion, saying she believes it must remain safe and legal.

She met privately with Pope Benedict XVI in 2009 during her visit to Rome. After that meeting, a Vatican spokesman said the pope “took the opportunity to speak of the requirements of the natural moral law and the church’s consistent teaching on the dignity of human life from conception to natural death.”