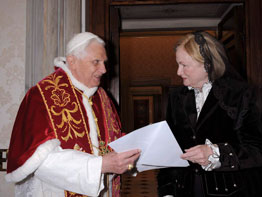 ROME – The new U.S. ambassador to the Vatican said she expects Pope Benedict XVI’s upcoming visit to the United States to be a thought-provoking event for Catholics, non-Catholics and international representatives.

Americans who listen carefully will discover in the pope a “world-class intellectual who can speak in terms that are simple and clear and readily accessible,” Mary Ann Glendon said in an interview with Catholic News Service March 14.

The pope can be expected to touch on some particular social issues, but his deeper message will be about conscience-forming and the values that underpin life in the church and in society, she said.

Glendon spoke in her office at the U.S. Embassy to the Holy See, which overlooks the imperial ruins of the Palatine Hill and an ancient Roman racetrack.

The ambassador took up her post in late February and hit the ground running. In addition to helping plan for the papal visit, she is already preparing a series of four major human rights conferences and considering an embassy-sponsored program to help fund and train Catholic health care workers.

Right now, the pope’s April 15-20 visit to Washington and New York looms as the biggest event on the embassy’s radar.

Glendon said the pope is going to the United States primarily as a pastor who “wants to speak to the deepest concerns of his flock.” She noted that the United States has one of the world’s largest Catholic populations – a fact that’s often overlooked.

She said the wide variety of events along the papal itinerary, from a meeting with Catholic educators in Washington to a stop at ground zero in Manhattan, will allow him to “share in the joys and sorrows, grief and anxieties” of the faithful.

But the pope has always reached out to people of other faiths and people of no faith, so his visit will no doubt have a resonance that goes beyond the Catholic Church, she said.

Glendon, a Harvard University professor for many years, said she’s been amazed at the pope’s smooth transition from scholar to universal pastor. On a wide range of faith and values issues, he is able to tailor his remarks to different audiences and make a connection, she said.

“Let me be quite clear. I think the kinds of things he says require close attention,” she said.

“He does not dumb down, and I think that’s his particular gift, that he is able to communicate very profound and complex ideas in accessible language,” she said.

Those who make the effort and listen carefully while he’s in the United States will be rewarded, she added.

Glendon will be at the White House April 16 when President George W. Bush meets the pope for the second time. The ambassador described the encounter as a continued conversation between two global leaders who share a “close correspondence of interests.”

All three goals fall under what the White House calls the “common commitment to the importance of faith and reason,” which has been a hallmark theme of Pope Benedict’s pontificate.

Glendon said she wouldn’t be surprised if the two leaders also discuss another common interest: finding creative new ways of partnership between public and private agencies in the fight against poverty, hunger and disease.

The ambassador said she didn’t know if Iraq would be addressed in the talks. Reiterating a position taken by other U.S. ambassadors to the Vatican, she said that despite “initial differences” between the United States and the Vatican on Iraq “the Holy See is now fully supportive of U.S. efforts to rebuild the country and to establish peace in the region.”

Glendon said the pope will no doubt touch on politics in the broad sense – the formation of consciences and “how we order our lives together” – but not on partisan issues.

“Like Catholic social thought in general, the pope remains at the level of principle. He doesn’t enter into the discussion of particular programs and policies,” she said.

This is an approach that respects the freedom of the faithful, but also reminds them of their responsibilities, she said. After all, “the secular sphere, the sphere of politics, is the sphere where the laity is supposed to take the lead,” she said.

Glendon said that she, like many people, is wondering what the pope will say when he addresses the United Nations April 18. Given his basic approach of nurturing what is sound and healthy in a group or organization, she thinks his focus will be on reminding the international community of the values on which the United Nations was founded.

That is a topic on Glendon’s mind, too. Less than two weeks after the pope returns from the United States, the embassy is sponsoring a high-level conference on “Latin America and the Human Rights Project,” which will look at the founding values behind the U.N.’s 1948 Universal Declaration of Human Rights.

The ambassador is plannng three more human rights conferences over the next eight months, to commemorate the U.N. declaration and as a buildup to the 25th anniversary of U.S.-Vatican diplomatic relations in 2009.

An embassy program to assist Catholic religious orders that provide health care is at the idea stage. It would aim to open a new chapter of U.S.-Vatican cooperation in needy areas.

Glendon said she’s still making the transition from academia to diplomacy. She has served with Vatican delegations to international conferences and headed the Pontifical Council for Social Sciences, so she already knows the Vatican terrain.

The hardest part, she said, is the move from maximum freedom – including freedom of expression – as a private individual or university professor to the more controlled role of an ambassador.

“I now represent the values and interests and ideals of the United States. I do it with great pleasure, but it’s a change,” she said.

The simple freedom of physical movement is also different as a public official, she said.

“When you have to go everywhere with a pair of escorts, it kind of puts a damper on your desire to window-shop,” she said.