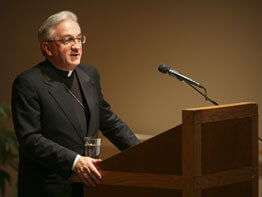 NOTRE DAME, Ind. – Religious leaders must speak out “loud and clear” against those who try to use sacred texts such as the Quran or the Bible to justify violence or human rights violations, the Vatican’s nuncio to the United Nations said in a lecture at the University of Notre Dame.

He said the spread of terrorism has “triggered a renewed interest in Christian-Islamic dialogue.”

“It’s not enough for any religion to say: We have nothing to do with extremists, with fundamentalists; or, extremists do not speak for our respective religions,” Archbishop Migliore said. “Indeed extremists and fundamentalists do make reference to the same sacred texts; they even dare to portray themselves as the faithful interpreters and keepers of those sacred texts.

“Rather, we have to engage those who try to justify their unjustifiable acts of violence and multiform violations of human rights using those same texts and proclaim it loud and clear that those texts do not lend themselves to a reading which leads to violence,” he added.

The archbishop opened his talk with an ancient Middle Eastern story about a man who saw something approaching in the desert and thought it was a monster until it came closer and he realized it was his brother.

Similarly, “Muslims look at Christians as the monsters of the Crusades … but above all, they view and fear the Western secularized world where Christians live going adrift,” he said. “Christians, on the other hand, see in Muslims the threatening monster of religious intolerance that seems to render them indisposed to welcome the cultural and juridical values that shape our Western societies.”

The history of relations between Christians and Muslims has been “marked by long periods of incomprehension, of rivalry and at times also very violent oppression, interspersed with intervals – although truly limited in time and space – of peaceful coexistence and of mutual cooperation at all levels,” he said.

But Archbishop Migliore cited three important “points of convergence” between Christians and Muslims: “We are all children of Abraham; both are monotheists and belong to a religion gifted with a sacred book.”

“The similarities that are found” in the Bible and the Quran “offer starting points and basis to achieve together personal holiness and the common good of society,” he said.

Archbishop Migliore suggested that the theme of “love of God and neighbor” could be the source of fruitful dialogue between the two religions.

“I don’t have the competence to tell you what is the breadth of the terms ‘brother’ and ‘neighbor’ in the sacred texts of Islam,” the nuncio said. “However, this will be a fundamental point for dialogue on principles and dialogue on daily living and coexistence.

“In fact, if Christians and Muslims rediscover together the profundity and fruitfulness of the messages that their respective texts contain on the topic of love of God and neighbor, … we will assist in shedding light and good will to resolve many questions concerning reciprocal respect and collaboration for peace,” he added.

Such dialogue also must be based on the consistent conviction “that all human life is sacred and endowed with an inherent dignity, without exception,” he said. “Otherwise, we would keep the door open to loopholes, to exceptions which belittle our common belief and frustrate our efforts toward coexistence and cooperation.”

Archbishop Migliore decried a “cultural fragmentation” that is as ancient as the tower of Babel and is “particularly evident today.”

“The air that one breathes daily at the United Nations is often polluted with national interests that impede a decision not only upon challenges and current priorities, such as security, peace and development, but directly at times on smaller things,” he said.

But he also said the United Nations “hosts many civil servants who have at heart the culture of peace, the peaceful coexistence and fruitful collaboration with billions of people belonging to diverse cultures, traditions and religions.”