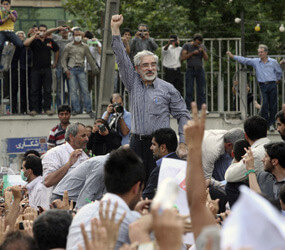 WASHINGTON – Despite cries of voter fraud and the promise of a limited ballot recount, two U.S. Catholic scholars said they believe the re-election of Iranian President Mahmoud Ahmadinejad will stand.

“Nobody can really predict the outcome of the current situation in Iran,” said Scott Alexander, director of Catholic-Muslim Studies at the Catholic Theological Union in Chicago, the largest Catholic graduate school of theology and ministry in the U.S. “My guess would be the short-term outcome would be another four-year term for Mahmoud Ahmadinejad.”

International observers have questioned the speed with which election officials were able to count nearly 40 million handwritten paper ballots after late pre-election polls indicated it would be a very close race.

The official results have spurred protests by hundreds of thousands of Mousavi’s supporters, with the ensuing violence claiming several lives in Tehran, international media sources reported.

Mousavi appealed to young Iranians, women, intellectuals and middle-class professionals, while Ahmadinejad cultivated support among workers, laborers and Iranians living in the rural areas, said John Esposito, a Georgetown scholar of international affairs and Islamic studies and a co-author of the book, “Who Speaks for Islam? What a Billion Muslims Really Think.”

The Associated Press reported June 15 that Iran’s Guardian Council said it was ready to recount specific ballot boxes. The 12-member Guardian Council include clerics and experts in Islamic law.

“The signs and likelihood of voter fraud are very strong, from the premature announcement of a sweeping victory to the shutting down of opposition centers and arrests,” Esposito said.

“In the end it seems clear that (Iran’s supreme leader) Ayatollah Ali Khamenei is more comfortable with Ahmadinejad than Mousavi,” he said.

“The silver lining in the cloud hanging over the recent election in Iran, I think, is the fact that the Iranian body politic is relatively independent and energized,” Alexander said, noting “that is the key to successful self-determination for most contemporary Muslim-majority nation states.”