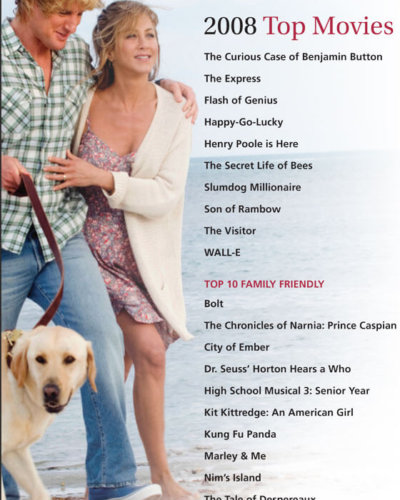 NEW YORK – At the start of the new year, and with the Academy Awards fast approaching, the Office for Film & Broadcasting takes its annual look back at the past year in movies, singling out the worthiest for commendation.

As it happens, not all the choices correspond to those of the Oscar folks and the other seasonal award-givers. Naturally, in addition to artistic excellence, each film needs to be evaluated for its overriding spiritual and moral values, as well as how it presents the characters’ ethical choices.

Since most of the top 10 are adult viewing – or at least for older teens and up – the office has also compiled a top 10 list of family-friendly fare. Those choices follow the primary list.

The Office for Film & Broadcasting classification and Motion Picture Association of America rating are noted after each movie’s description.

“The Curious Case of Benjamin Button”: Director David Fincher’s expansion of F. Scott Fitzgerald’s story about a man born old who ages backward, has fine performances by Brad Pitt and Cate Blanchett, and presents an often profound perspective on the transience of human life (A-III, PG-13).

“The Express”: An inspiring fact-based sports drama, set against the background of the civil rights movement as a hard-driving coach (Dennis Quaid) hones the skills of a gifted African-American football player. Director Gary Fleder highlights the role of faith in shaping the player’s values (A-III, PG).

“Flash of Genius”: Greg Kinnear plays the real-life inventor of the intermittent windshield wiper who sued Ford Motor Co. over infringement of his patent. The story of an individual standing up for his rights is irresistible and the film beautifully underscores the importance of family and human dignity (A-II, PG-13).

“Henry Poole Is Here”: A moving fable of a depressed loner (Luke Wilson) whose life is changed when his kind neighbors discern an image of Christ’s face on his stucco wall. Director Mark Pellington sustains a delicate mood, and Wilson’s path to redemption is fully believable (A-II, PG).

“The Secret Life of Bees”: A beautifully produced adaptation of the best-seller about a spiritual beekeeper (Queen Latifah) who takes in a young runaway (Dakota Fanning). Writer-director Gina Prince-Bythewood elicits well-judged performances, and the compassionate story includes forgiveness and reconciliation (A-III, PG-13).

“Slumdog Millionaire”: A vibrant drama in which a Mumbai street kid (Dev Patel), suspected of cheating on a TV quiz show, tells his incredible life story to the police. Director Danny Boyle’s sweeping panorama, though harrowing, stresses the dignity of the underprivileged and the primacy of spiritual values (A-III, R).

“Son of Rambow”: A touching chronicle about the unlikely friendship between a reserved schoolboy and a rambunctious fellow student as they collaborate on a homemade sequel to “Rambo.” Writer-director Garth Jennings’ warmly humorous film affirms faith as well as friendship (A-III, PG-13).

The top 10 family films (also in alphabetical order) are:

“Bolt”: Disney’s cute animated tale about the sheltered canine star of a TV show (voice of John Travolta) who learns to cope with the real world. Directors Chris Williams and Byron Howard’s endearing adventure sees its hero learning to believe in himself and discovering the value of friendship and teamwork (A-I, PG).

“City of Ember”: An imaginative futuristic tale about a doomed underground city and a brave girl who tries to discover the secret way out. With a clever production design and a cast that includes Bill Murray, director Gil Kenan’s film imparts good values and makes suitable entertainment for all but the youngest viewers (A-I, PG).

“Dr. Seuss’ Horton Hears a Who”: An enchanting animated adaptation of the classic book about a warmhearted elephant (voice of Jim Carrey) who discovers that a speck of dust is home to the microscopic town of Who-ville. The film, co-directed by Jimmy Hayward and Steve Martino, promotes excellent values (A-I, G).

“Kung Fu Panda”: A delightful animated fable about an out-of-shape bear (voice of Jack Black) who must transform himself to combat a villain. Co-directors John Stevenson and Mark Osborne’s wholesome film, by turns amusing and spectacular, promotes determination and self-confidence (A-I, PG).

“Marley & Me”: The heartwarming, likable true story of a couple (Owen Wilson and Jennifer Aniston) who adopt an unruly Labrador. Director David Frankel’s adaptation of John Grogan’s best-seller affirms marriage and parenthood but a bittersweet ending makes it best for adolescents and above (A-II, PG).

“The Tale of Despereaux”: A charming animated adventure story about a chivalrous mouse (voice of Matthew Broderick) who is banished to a rat-filled tunnel. Co-directors Sam Fell and Rob Stevenhagen’s painterly adaptation of the novel is both innocent and idealistic as it celebrates its hero’s sense of honor as well as the power of forgiveness (A-I, G).

The Office for Film & Broadcasting classifications for the films listed above are: A-I – general patronage; A-II – adults and adolescents; and A-III – adults. The Motion Picture Association of America ratings for the films listed above are: G – general audiences. All ages admitted; PG – parental guidance suggested. Some material may not be suitable for children; PG-13 – parents strongly cautioned. Some material may be inappropriate for children under 13; and R – restricted. Under 17 requires accompanying parent or adult guardian.