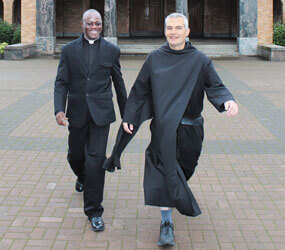 PORTLAND, Ore. – Two seminarians – a monk and a future diocesan pastor – say their differing paths complement each other.

Philip Okwama, 31, is in his third year at hilltop Mount Angel Seminary, 30 miles south of Portland. He plans to spend his life as a parish priest in western Oregon, promising celibacy, simplicity of life and obedience to his archbishop.

As a boy in the southern Kenyan town of Migori, not far from Lake Victoria, Okwama was summoned one day to help prepare the parish house for the arrival of a new pastor. On the way back home, he and his younger brothers walked past a home for widows, usually a sad and quiet place. But on this day, the women were standing around a stranger and laughing heartily, sharing stories. What kind of man, Philip wondered, could bring such brightness to a place like that?

The following Sunday at church, the boy realized that the man he saw was the new pastor. And as the years went by, he observed how this priest lived humbly for others and inspired others to do the same.

“He evangelized the parish,” Okwama said in an interview with the Catholic Sentinel, newspaper of the Portland Archdiocese. “He called parishioners to care for others in need, to be with them, share time, accompany them.”

That kind of service, with the Eucharist celebrated in a way that compels people to love others, is what Okwama hopes for in his own parish life. He already has the language tools for his ministry by speaking English, French, Swahili and his tribal language, Luo.

Brother Jacob Stronach, 41, is a fourth-year seminarian and he was just ordained a deacon during his fourth year of seminary. Brother Jacob opted for Benedictine monastic life, and will spend most of his years at Mount Angel Abbey in prayer and work. He has professed the vows of obedience, stability and “conversion of life.” Chastity and simplicity are an assumed part of the monastic way.

Born into a Pentecostal family, young Mark Stronach lost touch with his faith until the mid-1990s when his parents died of cancer. He said he gazed at his father’s lifeless body and embraced the idea of an everlasting soul. That started an intellectual and spiritual trek that would eventually bring him to the abbey’s door.

“My whole view of the universe, if I really believed in the immortality of the soul, was starting to change,” he told the Catholic Sentinel. “I came to God through his pain-installment plan.”

As he healed, he began reading about religion and decided the most substantial ideas could be found in Catholicism. The history of the church impressed and thrilled him. He found the writings of Blessed John Henry Newman, the famous 19th-century British theologian and spiritual writer who left the Anglican Church and became Catholic, especially articulate and inspiring.

He called the local parish and entered classes for those who want to join the church. Before long, he felt a call to serve as a priest and was consulting with vocations directors.

A friend invited him to Mount Angel and he went, realizing for the first time Oregon has a monastery.

He also began to see the Benedictines would be a good fit.

“I was feeling a desire for longer time in prayer, study and silence,” he said.

Okwama, considering his story and Brother Jacob’s, cites St. Therese of Lisieux, who wrote that the varied vocations of the church are best understood as different ways to love.

Monks, Okwama said, live at a monastery where visitors – including seminarians at Mount Angel – can come “draw the living water.”

He explains that diocesan priests, by comparison, go out to the world to point out and express the love of God in daily life.

“The monks are really teaching us to live in humility,” Okwama said. “They teach us as future pastors to give that kind of servant leadership.”

Brother Jacob is in the middle of an intern year at Sacred Heart Parish in nearby Gervais. He calls the pastor there, Father Ron Nelson, “an edifying example.” Parish priests, the monk says, because they are so much in contact with the world, offer a good model for the task of all Christians – bringing sacred truths to a society that is becoming more and more secular.

With that, Okwama and Brother Jacob set off side by side on a blustery afternoon at the hilltop abbey, headed to a class on Scripture.