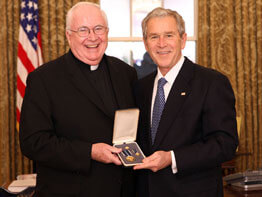 WASHINGTON – Two priests were among more than a half-dozen Catholics in a group of 24 people awarded the Presidential Citizens Medal Dec. 10 by President George W. Bush.

The citation for Father Scully released by the White House noted that he “has committed his life to strengthening communities through faith-based education that prepares individuals for a lifetime of achievement, service and compassion.” It said he has “developed innovative ways to support under-resourced schools.”

Father Foley was cited for successfully reaching some of the country’s most vulnerable youths “and instilling in them a love of learning. Through his spiritual leadership of a faith-based education system that partners with the community, he has provided opportunities for young people to achieve their dreams,” the citation said.

Mr. Sinise, known for his roles as the lead investigator in the TV series “CSI: NY” and as Vietnam veteran Lt. Dan in the film “Forrest Gump,” was cited as a humanitarian and a patriot.

“Working alongside our military and reaching out a compassionate hand to Iraqi children, he is helping a society once brutalized by a tyrant to rebuild and realize the great blessings of liberty,” said the citation. “He has also traveled the world to show America’s gratitude to our service members.”

In 2005, Hollywood-based Catholics in Media Associates honored Sinise with its Humanitarian Award for the same type of work. At that ceremony, Mr. Sinise thanked his wife, actress Moira Harris, for leading the family to embrace their Catholic faith and inspiring him to commit to service projects.

Dr. Donald W. Landry, a physician and organic chemist who chairs the department of medicine at Columbia University in New York, was cited by the White House as “a man of science and a man of faith” who has “demonstrated that there are responsible and ethical ways to advance stem-cell research.”

In a lecture this spring at Sacred Heart University in Connecticut, Dr. Landry touched on the religious and moral implications of stem-cell research, discussing how to avoid destroying human embryos for the studies.

Another Catholic, Robert P. George, professor of jurisprudence at Princeton University in New Jersey, was honored for his work in constitutional law and Western political theory. The citation said Mr. George, a member of the President’s Council on Bioethics “has brought forceful analytic clarity to the study of America’s ideals and institutions.”

Retired Admiral James D. Watkins, a Knight of Malta and the father of a priest of the Archdiocese of Washington, was cited by the president as exemplifying “the American ideals of courage, character and ingenuity. He has brought great skill and determination to all of his duties and demonstrated a patriot’s devotion to our country.”

Raymond G. Chambers, founder of the Amelior Foundation in his native Newark, N.J., where he graduated from St. Benedict’s Preparatory School, was honored for aiding at-risk youths and fighting malaria in Africa.

Teach for America founder Wendy Kopp was cited as “an education innovator who believes that every child can learn if given a chance,” the citation said. “Through her determined efforts, she has created opportunities for new teachers to help disadvantaged children realize their potential.”

Kopp told a C-SPAN interviewer last year that she began to shape her ideas for education support for disadvantaged students as a student herself, starting at a Catholic elementary school in Texas.