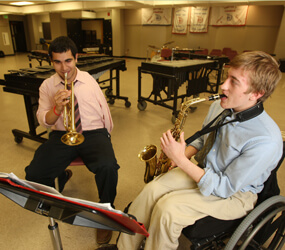 Everyone knows him as the guy with one arm.

Millad Sajjad, a senior at Calvert Hall College High School, uses that arm to play the trumpet in the Towson school’s various bands.

Other students ask the jet-black-haired Muslim, “How do you do it?”

Sitting next to him in a wheelchair is his friend and fellow Cardinal John Bennett, who plays the piano and saxophone.

“And he’s quite amazing at both,” said Millad.

The boys seem to understand each other – especially their passion for music – since they both live with disabilities.

Each boy offers plenty of optimism.

Born with one arm, Millad learned to play the clarinet, violin and the trumpet in his elementary school days, and he stuck with the trumpet. Knowing how to play the instrument motivated him when he entered Calvert Hall.

“I wanted to be the guy who could play the high note,” he said. “Now I can quite easily.”

As a member of concert band, jazz band, marching band, competition band and the school’s new steel drum band, Millad likes being able to use his talents, but what he enjoys more is being with friends.

“I’d rather be in a competition on a weekend,” he said, “than at home alone doing homework.”

Music has been the solution to his desire to play sports. Although he played on Calvert Hall’s tennis team as a freshman and sophomore, he would have rather played football and lacrosse. But because Millad has only one kidney, contact sports are a no-no according to his doctor – and his mother.

From the time he was 2 until the fifth grade, Millad wore a robotic arm; however, he said he cried when it was put on because it hurt. As a teen, he chooses not to use a prosthesis.

“It would take away from who I am,” said the band president, “the guy with one arm.”

Millad will attend the local Stevenson University in the fall and admits to feeling sad about graduating. For now, he’s busy making musical memories at Calvert Hall.

This year’s highlight for John, a sophomore, was learning how to play the fast-paced tune “Salt Peanuts.”

As members march in the Cardinals’ competition band, John stays stationary, playing the piano in the front ensemble.

“I like being in an ensemble,” he said, “playing with other people.”

John uses a wheelchair due to spina bifida, which is when the spinal column doesn’t close entirely when a baby is in the womb. Although the musician was ambulatory for a long while, he said, the chair has been his constant companion for a year and a half. Although he can move around on crutches somewhat, he can’t stay on them for long.

“I’ve accepted it,” said the parishioner of St. John the Evangelist, Hydes. “I’ve always had health problems. I just put a positive spin on it – you can’t be miserable all the time. I treat it like nothing is wrong. Basically, I can do everything anyone else can do.”

He plans to continue with music throughout high school. He sings in the chorus, and he also likes jazz, theater, film and acting. Additionally, John is a game announcer for junior varsity basketball.

“If I didn’t have a disability,” he said, “I’d probably not be interested in music.”

He may have turned to sports instead.

Brian Ecton, director of instrumental music at Calvert Hall for the last eight years, said the boys expect nothing different and set a fine example for the group.

“They are both amazing individuals … never a complaint. They never allow their disabilities to get in the way of anything.”

The marching band must perform calisthenics and pushups to prepare their bodies.

When motivating other students to finish the pushups, Mr. Ecton sometimes says, “C’mon, Millad’s doing that with one hand!”

The director said that after the senior graduates, “I’m going to lose that edge.”