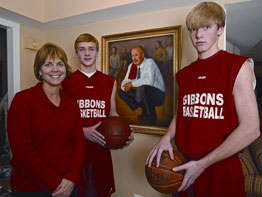 The Ray Mullis Gymnasium on the campus of Cardinal Gibbons School was filled from noon until five p.m. Dec. 21, when the Crusaders hosted arch-rival Mount St. Joseph in a basketball triple-header.

In the first game, the Crusaders’ freshman team excited the home crowd with a 71-51 win. It was the only bright spot for Gibbons that day. The varsity and junior varsity lost to the Gaels, but the freshman game was special.

Two familiar names were in the starting line-up. Mike and Ryan Flynn are the twin sons of Tina Flynn and her late husband Bob, who died of a heart attack at age 49 on Jan. 12, 2007.

Bob Flynn was a marginal high school player under Mullis in the 1970s, but loved the game with an unmatched passion and knew early on that he wanted to be a coach.

He absorbed all he could from Mullis and had such admiration for him that he gave his family dog the same name, “Rebound,” as the one given to the Mullis’ family dog.

Flynn gained another mentor in De Matha Catholic’s legendary head coach Morgan Wooten, whom he met while serving as a counselor at Wooten’s summer camps.

After graduating from Mount St. Mary’s University, Flynn joined the coaching fraternity at St. Joseph’s High in Emmitsburg. After working at North Carroll High, he returned to Mount St. Mary’s, where he spent 10 years as an assistant to another basketball coaching legend, Jim Phelan.

Flynn led St. Mary’s to a landmark season in 1997-98, but when the opportunity to return to Gibbons presented itself, he jumped at the chance to lead a program which had struggled since the 1994 passing of Mullis, who coached the Crusaders to a Baltimore-record 631 victories.

Young Mike and Ryan, who attended the parish school at St. Mark in Catonsville, would tag along with Dad and hang around the gym for hours on end.

In 2005, Flynn was offered the head coaching job at McDaniel College and made a tough decision to leave Gibbons. He had always loved the Westminster area and the purity of the game at the NCAA Division III level. He also saw it as an opportunity to build some financial security for his family, which includes Caitlin, then a student at Mount de Sales, now a McDaniel sophomore.

In a very short time, he was well on his way to turning around another long- suffering program, until his life was cut tragically short.

Now fans of Flynn and Gibbons are heartened at the sight of his twin sons sporting the Crusaders’ colors.

“Bob would be so proud if he could see his sons out there on the court, wearing the Gibbons’ uniforms,” Tina said.