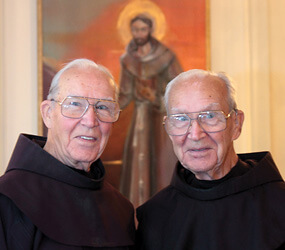 The twins, natives of Buffalo, N.Y., who spent the past three years in retirement at a Franciscan friary in St. Petersburg, had been Franciscan brothers for 65 years. Both men were admitted to the hospital just days before both died of heart failure at age 92.

A funeral Mass for the two men June 6 at St. Mary Our Lady of Grace Church in St. Petersburg was attended by only 50 or so people, but their story had spread far beyond the confines of their own community.

Franciscan Father Dominic Monti, provincial vicar of Holy Name Province, which includes 12 states along the East Coast, said he was amazed at the widespread coverage of the brothers’ deaths.

He said he did an online search on the two men and found more than 375 stories.
“I think they would crawl under the table right now if they knew all this attention that’s being devoted to them,” he told the Tampa Tribune.

A major part of the brothers’ story is not just the coincidental timing of their deaths, but their constant togetherness ¬ spending only their first assignments apart. From 1946 to 1951, Brother Adrian was a sacristan at St. Francis of Assisi Church in New York, and Brother Julian was general manager of St. Anthony Shrine in Boston. They also were separated from 1951 to 1956 when Brother Julian was assigned to St. Patrick’s Parish in Buffalo and Brother Adrian was at Bishop Timon High School in another part of town.

The brothers were born Jerome and Irving March 27, 1919, to Dr. Julian Riester and his wife, Clara, who also had five daughters. They took saints’ names when they became Franciscan brothers.

The twins were together at St. Joseph’s Collegiate Institute in Buffalo, then radio technology school in Los Angeles and years of ministry, including 35 years at St. Bonaventure University near Buffalo, where they were campus carpenters, gardeners and chauffeurs.

“It really is almost a poetic ending to the remarkable story of their lives,” said St. Bonaventure spokesman Tom Missel, who said the timing of their deaths was “hardly surprising given that they did almost everything together.”
A cousin and close friend, Michael Riester, echoed that sentiment, telling the Buffalo News: “If ever there is a confirmation that God favored them, this is it. They weren’t even separated for 12 hours.”

He said his cousins will be remembered as “exemplary men and holy men” who lived their lives in a truly Franciscan spirit.
“They had this intimate bond, in which neither was selfish at all,” he said. “And because they were so in tune to God and to each other, it’s not surprising at all.”
The brothers are survived by two of their sisters, one in Buffalo and one in St. Petersburg.

After the June 6 funeral Mass, the brothers’ bodies were flown to Buffalo and buried June 8 at St. Bonaventure Cemetery, across the street from the university