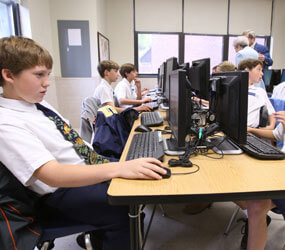 The Office of Schools Planning and Implementation, the Department of Schools and representatives from 12 schools met at Ellicott City’s Church of the Resurrection Feb. 7 to discuss the new Archdiocesan Collaborative Schools governance model.

The Archdiocese of Baltimore has chosen the 12 schools (see attached chart) to pilot the model, which was first recommended by Archbishop Edwin F. O’Brien’s Blue Ribbon Committee on Catholic Schools last year.

The schools are located in Alleghany, Carroll, Baltimore and Harford counties, as well as Baltimore City and will begin implementing the model in July.

Monsignor Robert L. Hartnett, executive director of the Schools Planning and Implementation Office, told attendees that the model is playing to the strengths of education, school and religious leaders.

Addressing attendees, Interim Superintendent Barbara Edmondson said, “We are excited to move forward with this model because it really gives us the best of both things. It really honors local leadership, and it strengthens the school boards. It helps you to make decisions for your school and your local community which are best for you, but with the resources that can be available to you through the archdiocese.”

Under the model, the head of the school (principal and/or president) reports directly to the superintendent, who has the ability hire and dismiss heads of schools.

Pastors, burdened with increasing responsibilities in the modern church, will transition to become canonical representatives instead of making school administrative decisions. Canonical representatives are appointed by the archbishop and will oversee the Catholic identity of the institution, coordinating worship services and providing connections between schools and parishes.

Each school will also have a deliberative, self-perpetuating board which will assist in leadership and key decisions, such as budget, development, marketing and planning. The canonical representative will serve on the school board and all members will be appointed by the archbishop.

The Office of Schools Planning and Implementation hoped to use the Feb. 7 meeting to clarify leadership roles.

During a January interview with The Catholic Review, members of the office said leadership is the crux of the new model.

“The Blue Ribbon Committee spent an enormous amount of time in their deliberations talking about leadership,” said Mary Ellen Fise, the Office of Schools Planning and Implementation’s program director. “The reason we put the Archdiocesan Collaborative model together was to get that leadership right.”

In that January interview, Monsignor Hartnett said he understood trepidation about the model. As pastor of Our Lady of Mount Carmel parish in Essex, he has overseen a parish elementary school and high school.

Monsignor Hartnett said in January there will be few noticeable differences in the daily operation of the Archdiocesan Collaborative Schools.

“We hope,” Monsignor Hartnett said, “that there will be enhanced resources for them as a result of this.”