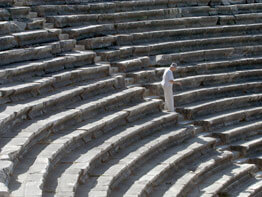 WARSAW, Poland – Turkey’s Catholic bishops marked the 2,000th anniversary year of the birth of St. Paul in the southern Turkish city of Tarsus and outlined preparations for the Pauline year.

“This event is for all Christian communities, since Paul is a teacher for all the disciples of Christ. However, the anniversary is of particular importance for us living in Turkey – the apostle of the gentiles is a son of this land, and it is here he exercised most of his ministry,” said a letter from the bishops’ conference, which includes bishops of Turkey’s Armenian, Syrian, Chaldean and Latin-rite churches.

“We are immersed in a Muslim world where faith in God is still very present, both in its traditional aspects and in the assertion of new Islamic religious organizations,” said the letter, which was to be read in Catholic churches Jan. 25, the anniversary of St. Paul’s conversion.

Pope Benedict XVI convoked 2008-09 as a special Pauline year of events marking the anniversary of the saint’s birth. The pope said the celebrations should have a special ecumenical character.

Bishop Luigi Padovese, apostolic administrator of Anatolia, told Catholic News Service Jan. 9 that the anniversary would begin formally June 21-22 and include a Mass in Tarsus celebrated by Cardinal Walter Kasper, president of the Pontifical Council for Promoting Christian Unity. It also will include a national pilgrimage to sites associated with St. Paul.

He added that talks on ecumenical initiatives were under way with other denominations that make up Turkey’s 120,000-member Christian minority, and he said he counted on officials in Tarsus to make facilities available for pilgrims, while also allowing regular use of the Mediterranean town’s 12th-century St. Paul Church, now a state-owned museum.

“The local authorities are aware of their town’s significance for Christians and proud one of its citizens was once a key figure. On the other hand, they aren’t prepared for an increase of religious tourism,” he said. “But government officials have agreed we should be able to worship here. After all, we’re not missionaries – we are merely answering the needs of church members.”

The bishops’ letter noted that St. Paul had completed most of his 10,000-mile missionary journeys in Turkey and would have encouraged Christians to “intensify dialogue with the Muslim world” while remaining true to their religious faith.

“This very situation, in some aspects similar to those of the first communities living in diaspora, imposes on us a clear awareness of our identity,” it added. “Before being Catholics, Orthodox, Syrians, Armenians, Chaldeans, Protestants, we are Christians. Let us not allow our differences to generate diffidence to the detriment of the unity of faith.”

In the first century, St. Paul made three journeys through what is now Turkey, preaching the Gospel and writing letters to the Galatians, Ephesians and Colossians.