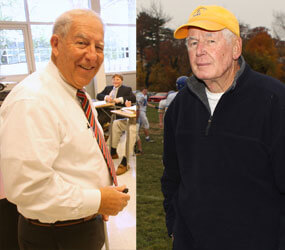 Miceli was a junior at City College, with friends at both Catholic schools. The Loyola fans that day included a lanky Dons’ freshman, Joe Brune. It was not his first Turkey Bowl.

“From the time I was 6 or 7, my Dad took me to the game,” Brune says. “I remember going to (Johns Hopkins University’s) Homewood Field for Loyola-Calvert Hall games.”

The two men are authorities on one of the nation’s oldest Catholic high school rivalries.

With Miceli as coach, the Cardinals won a record seven straight in the series from 1978-84, all at the expense of Brune, who directed the Dons for 35 seasons . His Loyola program recovered nicely, however, vanquishing Calvert Hall 11 straight years, from 1989 to 1999.

Neither is done contributing.

Miceli, 78, is in his 51st year at Calvert Hall, where he teaches math, enforces the dress code and sets an example for freshmen and Christian Brothers alike.

Brune, 76, no longer teaches at Loyola, but returns there on fall afternoons, to assist with the junior varsity. Mornings, he teaches English and public speaking at another Jesuit institution, St. Ignatius Loyola Academy, a boys’ middle-school in Baltimore.

Legions will seek out and pay homage to Brune and Miceli Thanksgiving Day at M&T Bank Stadium, where Calvert Hall and Loyola will meet for the 91st time.

Miceli grew up near the intersection of Greenmount and 34th Street, and went to old St. Bernard Parish. Brune was raised a few blocks to the north, and went to St. Mary of the Assumption School in Govans.

Both spent two years in the U.S. Army out of college, The Citadel for Miceli, Bucknell University for Brune. Both saw their football education furthered at City College, Brune under the tutelage of a Calvert Hall guy, no less.

The late George Young, of old St. James Parish, Calvert Hall and the NFL Hall of Fame as the architect of New York Giants teams that won Super Bowls XXI and XXV, left coaching his prep alma mater after the 1958 season for City College.

“I’d been doing that for years,” Miceli says, “ever since I survived the cuts for City College football and my father refused to sign the permission slip. He wanted me to be a doctor or lawyer.”

Miceli cut his coaching teeth as a 15-year-old, guiding a 10-12 sandlot team to a city title. Brune, a rangy tackle, helped Loyola blank Calvert Hall 19-0 in 1951. When he returned to the rivalry, in 1967, he began a stretch of lose one, win one against the Cardinals.

Loyola prevailed in 1974, the first meeting between Brune and Miceli as head coaches, but Calvert Hall won nine of the next 10, throttling the Dons during the Cardinals’ glory years, from 1978 to 1982, when Miceli’s team won or shared four A Conference titles, and shocking them in 1983.

Unbeaten Loyola, with multi-sport talents such as Pat Welsh, went ahead late, but Calvert Hall called a reverse on the ensuing kickoff and Gerrick McPhearson took it down to the 3-yard line and the upset.

Eight years later, during a Loyola rout of Calvert Hall, blocker Colin Brune stepped in front of a kickoff headed to Brad Hoag, returned it to midfield and popped up in celebration. Before his father could bench him, Colin was sat down by his brother, assistant coach Sean Brune.

Both Brune, who won over 200 games, and Miceli thrived by instilling eternal values.

“The big thing now,” Miceli says of a tackling style in vogue, “is ‘blowing them up,’ hitting a runner without wrapping them up. It’s a selfish deed, in my opinion. … Learn the fundamentals, and have the discipline to execute them. That’s pretty much what I apply in the classroom.”

And how is that working?

“His lesson plans are always detailed and precise, and he holds kids to expectations,” said Lou Heidrick, Calvert Hall’s principal and a former assistant coach for Miceli. “He’ll call parents at their home if their son is not performing. He’s a great role model.”

In the 24 years he assisted Brune, Bill Korrow never saw his mentor get an unsportsmanlike conduct penalty. That even keel isn’t the only reason Korrow coaxed Brune out of retirement in 2007, to help with the Loyola J.V.

“Joe follows Loyola, he loves the school and I knew our boys would benefit from having him around,” Korrow said. “He feels very strongly, as I do, that the practice field is nothing more than a classroom that’s outside.”

And what has Brune taught?

“Give your best effort, play according to the rules, be true to your teammates, respect your opponent,” he said. “That’s all part of the religious principles that the school (Loyola) stands for.”

Brune spoke from the last pew at St. Ignatius Church, where he and his wife Sheila, an administrative assistant at Loyola, are parishioners.

They have seven children and 14 grandchildren, who will enjoy their traditional football appetizer before sitting down to Thanksgiving dinner at 5 p.m.

Augie and Angela Miceli, longtime parishioners of St. Ursula in Parkville who summer on 57th Street in Ocean City, have three children and five grandchildren.

One more parallel: Miceli too got to coach his son, Augie Jr., Calvert Hall Class of 1982.