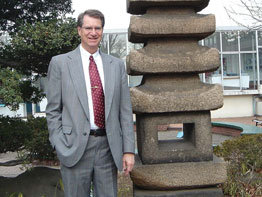 Trinity School, Ellicott City, has announced the appointment of Stephen Wilson as the first full-time head of the middle school, commencing July 1.

Mr. Wilson brings more than 27 years of experience in education as a principal, teacher and coach, most recently as the middle school principal of St. Mary’s Catholic International School in Tokyo for 12 years.

Since his first contact with the school, Mr. Wilson said he felt bonded to it. “From the first time I read about Trinity, I knew it was the school for me. As a career Catholic educator, I want to join a community not only as an educator but as a positive, productive member of that community.”

He and his wife, Susan, will reside in Howard County. The Wilsons have two adult children, Eric and Erin.

“We look forward to welcoming him to the Trinity family and working together to advance the mission of Trinity School,” said Sister Catherine.