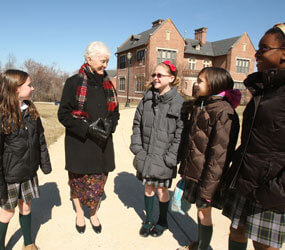 So, learning she would be inducted March 10 into the Howard County Commission for Women’s Hall of Fame was a total shock. A parent had nominated the school’s president of 40 years for the honor.

“It’s very humbling,” she said. “It was people going out of their way to do this. It was very kind.”

Success has come to the college-like campus of Trinity throughout Sister Catherine’s tenure. The school, which serves up to eighth grade, has twice been honored as a Blue Ribbon School of Excellence by the U.S. Department of Education.

Born in Baltimore but raised in the Washington area, Sister Catherine attended schools administered by the Notre Dame de Namur sisters such as Maryvale Preparatory School in Brooklandville. She was so influenced by the order that she has lived the vocation for 64 years.

Sister Catherine returned to Maryvale as principal of the lower school and was also served as principal of St. Ursula School in Parkville. In 1971, she was asked by her order if she would be interested in moving to Trinity, which was just 20 years old at the time.

There was talk, Sister Catherine said, of merging with nearby Our Lady of Perpetual Help School, which the order also served at the time.

But, Trinity has grown under her watch and has an enrollment of 380 students, with a highly successful pre-school and kindergarten program.

“I know that I am in a position where I can create an environment that really makes children happy and helps them to thrive,” Sister Catherine said. “I certainly want to have that same environment for my teachers where they can grow professionally and spiritually.”

Sister Catherine said Trinity is a labor of love.

“It’s hard work,” Sister Catherine admitted. “I guess I feel very privileged to be working with children and in a school community like this because it’s just a joy to see children blossom and grow every day.”

The school was bought by the Trinity School Board of Trustees in 2001, but an affiliation agreement maintains a strong bond with the Sisters of Notre Dame de Namur.

Changes to the campus include the building of a new middle school, the repurposing and refurbishing of older buildings, development of a new media center and the launch of the Julie Program five years ago. Named after St. Julie Billiart, founder of the Sisters of Notre Dame de Namur, the Julie Program works with students in kindergarten through fourth grade who have language-based learning issues. The intensive, daily training comes one-on-one or in groups and uses multi-sensory instruction.

Sister Catherine said giving to others is a way of life at Trinity School, where students serve people in need, from children to people in nursing homes.

Sister Catherine doesn’t believe she should remain in her office, but amongst the children and staff of Trinity. She has lunchroom duty, directs car arrivals and departures and knows and loves every member of the Trinity community.

“My main joy, and what motivates me, is the children,” she said.