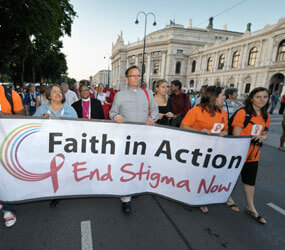 VIENNA – Large reductions in funding for AIDS work around the world are putting at risk the lives of people who depend on faith-based organizations for care, treatment and support, warned Catholic activists and others participating in the XVIII International AIDS Conference.

Results from a rapid assessment of 19 faith-based organizations working on AIDS in poor countries was conducted in June by the Ecumenical Advocacy Alliance, which announced the results at a July 21 news conference.

The study found that all but two of the agencies surveyed were already experiencing at least a flat-lining of funding. Some had already been forced to make cutbacks in the past six months while others had been warned that cuts in funding levels are about to be announced.

Becky Johnson, the researcher who compiled the report, said funding cuts to faith-based groups could devastate poor areas of the world, such as sub-Saharan Africa, where such organizations provide up to 70 percent of health care and HIV-related services.

U.S. Maryknoll Father Richard Bauer, executive director of Catholic AIDS Action, a program of the Namibian bishops’ conference, expressed concern that he may soon be forced to chose who lives and who dies.

“We provide support for over 14,000 orphans, and this cut in funding forces me to ask which child I have to say no to. What are the criteria? Is it the poorest kids, the HIV-positive kids, do we do psycho-social assessment, or what?” Father Bauer asked. “The donors say I’ve got to cut 20 percent, and I need their help in figuring out where. But when I ask, they respond with deafening silence.”

Father Bauer’s largest single funder is the U.S. President’s Emergency Plan for AIDS Relief, or PEPFAR, created in 2003. The priest said PEPFAR has told him to expect a decline in funds through 2015. That cut is rumored to be 20 percent, Father Bauer said, while the Global Fund to Fight AIDS, Tuberculosis and Malaria, another major donor, has indicated that he will soon lose an initial 10 percent, with more cuts likely to follow.

“PEPFAR wants to fund the government because they see that as more sustainable. Excuse me, but the government of Namibia came into existence only in 1990, whereas the church has been there for hundreds of years. If you’re really interested in sustainability, then fund the church,” Father Bauer told Catholic News Service.

The phrase “Treatment 2.0” debuted in Vienna, pushed by people such as Microsoft co-founder Bill Gates and former U.S. President Bill Clinton as code for doing more with less, for being smarter in carrying out programs. Yet Father Bauer said it does not apply to his programs.

“Everyone is talking Treatment 2.0 and that we have to be smarter. In some of the larger NGOs and government programs, they can do that. But faith-based organizations like the one I work with have no padding in the budget. We run things on a shoestring. Out of a sense of justice and integrity I never padded our budget. It’s already bare bones. I put in there just what I needed to provide services,” he said.

“Yet we just got a 17 percent increase in our electricity cost. There’s a petrol increase. And salaries have to go up at least 5 percent a year if we want to keep qualified staff. My fixed costs are going up, and the funding is going down. Yet they say, ‘Be smarter.’ Well, I give them my budget and say, ‘How do I do that?’ Because I don’t have the answer,” he said, adding, “I think the faith-based organizations have been smarter all along.”

“These findings are real. They aren’t an effort to paint a grim picture in order to appeal for more funds. It’s the daily reality that many faith-based organizations and other groups are facing,” she said.

Mogedal said faith-based organizations are the last groups that should be cut.

“It’s the faith-based services that have the longest history of being present with people in rural and remote areas of so many countries of the world, long before national programs were ready,” she said.

Yet it’s more than just history that makes them valuable, she said.

“The faith-based services have a unique profile. Around the mosques and churches there is a presence with people in their suffering and in their hope,” she said. “Through that relationship there is also a capability to communicate with people about health services, AIDS, behavior and stigma. Faith-based organizations use that relationship of being in dialogue with people who suffer to constructively add value to the services they provide, much more than other agencies can do who might also be providing services.”

She added that their record isn’t perfect, referring to religious support for discrimination against homosexuals in some African countries.

“Some faith-based groups have fomented stigma rather than release people from stigma, have created barriers to those living with HIV,” Mogedal said.

Ann Smith, HIV corporate strategist for the English and Welsh bishops’ Catholic Agency for Overseas Development, called the cutbacks in funding a sin.

“We’re hearing time and again from our partners that northern agencies are pulling back on their budget commitments. So they have to put people on waiting lists for antiretroviral treatment, which means you have to wait for someone else to die in order to start receiving treatment yourself. This is a sin against people living with HIV,” Smith told Catholic News Service.

She agreed that faith-based organizations are the last that should be cut.

“Research on antiretroviral treatment in Asia and Africa shows faith-based organizations have a higher level of compliance, because the service they provide is more than just the medical component, it’s all about support, home visits, and helping people reintegrate socially and economically. So adherence is much higher,” she said.

The irony of funding cuts is that current programs are working, Smith said.

“The staffs of these programs are today working with hope rather than despair. Rather than dying, people are asking them how to get a job or get back into school or learn farming skills. There’s a decrease in the number of orphans. All of that is going to change now for the worse with the withdrawal of funding. It’s an injustice that our churches should be shouting about very loudly,” she said.

“Namibia is a success story in terms of the number of women who accessed programs” of prevention of mother-to-child transmission of HIV, he said. “They did that because there are 3,000 Catholic AIDS Action volunteers wandering around villages with red T-shirts on, and as soon as they see a pregnant woman they go up to her and say, ‘Did you know there’s a medicine that can help your baby?’ They get over 85 percent of the women into the clinics. What’s going to happen to that?”

Mogedal called for an end to playing politics with AIDS.

“We can no longer afford to have politicians play around with AIDS, so we will keep pushing, keeping it visible, because that’s what it will take. We shouldn’t make AIDS the flavor of the month, as this is going to be a long haul,” Mogedal said.

“We need to mobilize the troops to make sure this stays on the agenda. And maybe it’s acceptable that it’s not at the top of the agenda, because being in the limelight for a politician means simple solutions and quick results, and HIV isn’t going to offer either. It needs hard solutions. It needs compassion and accompanying people. And who better than the faith-based communities to accompany people in their suffering? It’s their strength.”