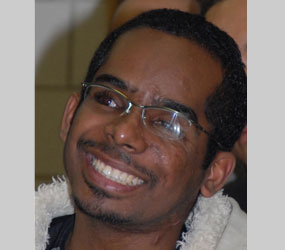 He has no recollection of the cab heading toward him, of his flying 25 feet through the air, of his body lying broken there on the roadside, of the helicopter trip to the Maryland Shock Trauma Center.

He didn’t know at first that the doctors doubted he would survive.

If he did, they thought, he would suffer permanent brain damage.

A priest came to give him last rites.

His mother fainted when she saw him.

But Raymundo Martinez defied all expectations and odds weighing heavily against him.

He had come to America from his home in Santo Domingo to work as a foreign exchange student for a second summer in Ocean City, where the cab hit him in 2007 as he headed to Wal-Mart on his bicycle to buy food.

He wasn’t wearing a helmet at the time, in part, he said, because he had practiced for a triathlon back home on high-speed roadways and never felt endangered.

In Ocean City, in an instant, his life changed forever.

It would take eight operations to put him back together again. He had suffered a crushed skull, facial fractures, a ruptured left eye globe, a fractured mandible and spine, a punctured lung, internal injuries to his stomach and abdomen and a severe fracture to his left leg and ankle.

Mr. Martinez, a slight 24-year-old with a boyish face, a mustache and closely cropped black hair, sat in the downtown Ronald McDonald House, where he lived while undergoing 18 months of treatment.

He speaks little of how he cried and cried when he learned treatment would take a year or two, of how the pain once got so bad that he wrote a note in the hospital saying he wanted to die, of the heartbreak of losing vision in his left eye, of his homesickness.

Instead, Raymundo Martinez speaks of miracles – even his accident, especially his recovery – of the many angels who gave him hope and embraced him with love, of his journey from lukewarm to fervent faith.

An architecture student at Universidad Autonoma de Santo Domingo, he said he had become far too focused on his career before the accident.

Now he has a much closer relationship with God and has learned to better balance his faith, family, friends and career.

“I was forgetting everything else around, and God was one of those things,” he said. “I wasn’t making time to go to church, pray, nothing.”

In retrospect, he said: “I mean, my accident was a huge miracle. I can’t be angry with God because by some way, it is part of his plan for my glory. Everything happens for a reason.”

‘I would not abandon him’

Father Robert Wojtek, a tall, bald Redemptorist priest quick to laugh, looked down at the frail young man amid a gaggle of tubes that summer day in 2007.

“If you can hear me, and if you understand me,” the priest said, “squeeze my hand.”

Mr. Martinez did, and Father Wojtek prayed with him.

Then the priest made a promise:

“I told him I knew that his parents weren’t there, but that I wouldn’t forget him, that he was going to make it through this, and I would be there and not abandon him.”

With that, Father Wojtek, pastor of the Catholic Community of St. Michael and St. Patrick in Fells Point, became not only Mr. Martinez’s priest, but also his surrogate father, confessor, friend, guardian angel, translator, adviser, advocate.

They went to ballgames and restaurants, to Harborplace and the National Aquarium, to Emmitsburg and Washington. Father Wojtek took Raymundo to meet his mother and his brother and visited Raymundo’s parents, Ramon, a hardware store owner, and Felicia, a hairdresser, when they came to America.

Mr. Martinez, Father Wojtek said, brought out the best in all those around him.

“He just has the simple spirit about him and a goodness in him,” Father Wojtek said. “From the get-go, he was just a fighter in the most positive sense of the word. It was obvious that God wasn’t ready for him, and he wasn’t ready to give up.

“In a sense, it’s almost like a kind of Lenten resurrection story – from death to new life, that no matter how dark and dreary things can get, there is always a light at the end of the tunnel.”

Home is where the love is

Parishioners and former employers in Ocean City, where he had three jobs, chipped in to help pay for his parents to fly to the United States.

Anne Marie Conestabile, regional director of the non-profit Council for Educational Travel USA (CETUSA), which sponsored Mr. Martinez’s Ocean City work-study in the summers of 2006 and 2007, helped him navigate the maze of medical care, insurance claims and visas for his parents. Ms. Conestabile also helped raise money for their airfare.

The Ronald McDonald House put him up for 18 months while he underwent treatment.

There, he met more than 1,000 children who came through during his time there.

He inspired them. They inspired him.

“Every child loved Raymundo, and he became the big brother to our global family. Raymundo embraced every one of them.”

Perhaps he saw a bit of himself in them.

“These kids; they are super-sick kids, but they are warmer to you and stronger than many people older than they are,” he said. “Usually, the ones who have been through the most pain, they are the strongest.”

The $200,000 in insurance from the student-exchange program and $20,000 from the Ocean City cab company’s insurance covered only about the first week of treatment at Shock Trauma.

Ms. Conestabile helped raise $30,000 in 2007 to cover some of the medical treatment, but Mr. Martinez still needed operations on his jaw, face and nose to help him breathe and chew – and couldn’t get the necessary treatment at home.

Dr. Gary Warburton, a University of Maryland Medical System surgeon, and other surgeons there agreed to provide the necessary care free.

At last, Mr. Martinez completed his surgeries in January 2008.

He marvels yet again.

Now Mr. Martinez is back home.

Before he left, at a farewell party at St. Patrick, Ms. Conestabile recalled that night in Shock Trauma when she sobbed and prayed.

“Dear God, bring somebody here who can understand him, who can be close to him.”

She looked up and saw Father Robert Wojtek.

She explained that a young man needed to be anointed. Now.

Is he from the Dominican Republic? asked Father Wojtek, who had spent nine years in that country and spoke fluent Spanish.

At the party, Ms. Conestabile hugged the man she first saw in the hospital bed that night.

“This is for my miracle student,” she said. “I will never forget you.”