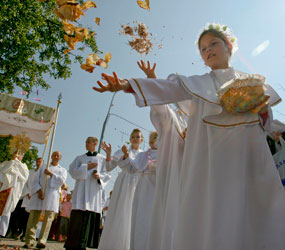 ROME – The transformation of bread and wine into the body and blood of Jesus Christ is like the transformation people undergo when they give themselves up to the love of God, Pope Benedict XVI said.

By partaking in the Eucharist, Christians become like Christ, he said. They are “part of his body, one with him,” and so are open to God and united with others near and far, Pope Benedict said.

In a Mass at Basilica of St. John Lateran June 23 celebrating the feast of the Body and Blood of Christ, the pope said that the transformative power of the Eucharist made it “the food of eternal life.”

At the Last Supper, he said, Jesus overturned the meaning of death. The changing of bread and wine into the body and blood of Christ “is the fruit of the gift Christ made of himself, the gift of love that is stronger than death.”

Its purpose is to transform lives and therefore transform the world, the pope said.

The sacrament of communion underscores the social commitment inherent in the church, Pope Benedict said, because whoever recognizes Christ in the host “also sees him in his brother who suffers, who is hungry or thirsty, or who is alone, naked, sick or imprisoned.”

The recognition and commitment to help others is even more important in a world where globalization makes everyone more dependent upon each other, the pope said.

The commitment to Christ is not easy, he said. “There is nothing magic about Christianity. There are no shortcuts.”

After the Mass, the pope led the traditional Corpus Christi procession from St. John Lateran to the Basilica of St. Mary Major for eucharistic adoration and Benediction.

He rode in a canopied flatbed truck to St. Mary’s, kneeling in front of a monstrance with the Eucharist. He was accompanied by priests, seminarians, religious, altar servers and thousands of faithful who walked through the streets of Rome in the traditional procession.