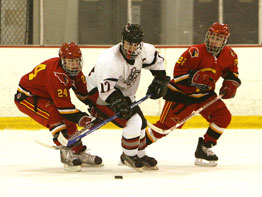 The Calvert Hall College Cardinals (4-0-1, 9-3-2 as of Jan. 14) skated to a 2-2 tie in early December against the reigning champs from Mount St. Joseph High School. It was a game that defined Calvert Hall’s season, especially since the Towson team had held a 2-1 lead with less than one minute remaining before the Irvington Gaels’ Anthony Contillo broke away for the score and the tie.

It was a defining moment since the Cardinals had lost a core group of players to graduation and transfer, making the 2007-2008 season challenging. This year, the Cards are out to an overall 9-3-2 season, and though young, show extreme poise and promise on the ice.

The Cards are led by senior goalie Stephen Blount, a four-year varsity player who, according to Head Coach Mike Shramek, is smart, coachable, calm and relaxed in the goal, motivated and continues to improve. “Stephen is a great kid, and this is his strongest year yet,” said Shramek.

The Cardinals were also surprised to net two talented transfers, sophomore center Zack Walz and junior center Andrew Klick. Both players have been top contributors and have complemented the defensive work of junior captain and strong defenseman Andy Yancone.

Yancone is a three-year varsity player and has shown exceptional leadership on the ice, playing at a high level and leading by example.

On Jan. 10, the Cards skated past Archbishop Spalding High School, 5-1 but will face Mount St. Joseph on Jan. 15 for another showdown. At this point, the Cards and the Gaels are the top two contenders in the MIAA A Conference. After tying St. Paul’s, 2-2, in a non-conference game on Dec. 11, the Cards have unleashed a 5-0 run in league play, scoring 26 goals to their opponents’ five goals.