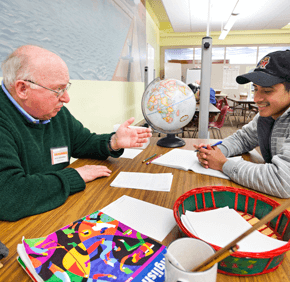 By Maria Wiering
mwiering@CatholicReview.org
Twitter: @ReviewWiering
It was July 7, 1984, and Jerry Schreiber was stuck in a crushed Amtrak sleeper near Burlington, Vt. He was en route to Montreal, Quebec, when his train derailed, scattering cars. It was morning but before daylight, and Schreiber remembers being jerked awake in his sleeping car, bracing himself, and then becoming trapped.
A woman stuck near him asked if he would pray the rosary with her, that they might be saved. He did. Four hours later they were pulled from the wreckage.
Five people were killed, all in Schreiber’s car. He would later learn that the disaster was a result of the previous night’s rainstorm, which washed out part of the roadbed supporting the tracks. His wrist and upper arm badly damaged, it was five months before he could return to work, and physical therapy continued for two years.
The incident did not result in a sudden, Saul-of-Tarsus conversion for Schreiber, a parishioner of Holy Trinity in Glen Burnie. Then in his mid-40s, he was satisfied with his life’s direction, he said.
What it did confirm was that he was on the right track, a route that led him to become a regular volunteer at the Esperanza Center, a 50-year-old Catholic Charities program in Fells Point where Schreiber, now 73, has taught Latino immigrants English for 17 years.
“It caused me to do a lot of thinking and reflecting and realizing how fragile life was,” he said of the crash. “I had a feeling that I don’t need to do anything heroic in my life. I don’t have to climb the ladder; I don’t have to look for success. … So, I felt comfortable in reaching out to people.”
Schreiber kept that outlook eight years later when Westinghouse Electric Corporation shut down a major division, causing him to lose his job. Instead of looking for new employment, he sought education, learning Spanish through Anne Arundel Community College; at a language institute of Cuernavaca, Mexico; and at the University of Guadalajara.
He wanted to use his new language skills to help others, he said. He teaches weekly at the Esperanza Center, helps to organize their events, and has tutored other English-learners in the Baltimore area.
Schreiber got involved in his parish’s Hispanic ministry, where he continues to serve as a lector and extraordinary minister of holy Communion, and is a member of the regional Hispanic ministry committee. He also teaches English to Father Jesus Aguirre Guzman, an associate priest at Holy Trinity, who is from Bolivia and serves the Spanish-speaking community.
Schreiber’s upbringing gives him a sense of connection to new immigrants, he said. He was raised in a German immigrant farming community in northern Pennsylvania. His family did not have much, but he learned the value of hard work, sacrifice and suffering, and helping others in need, he said.
He graduated from Pennsylvania State University in State College, Pa., with a degree in electrical engineering, and moved to Pittsburgh to take a job with Westinghouse.
The company moved him to Baltimore in 1963. He has traveled extensively for work and pleasure, broadening his view of the world and his aptitude for languages, he said.
Schreiber trained to be a better teacher through the Anne Arundel County Literary Council and worked with Spanish-speakers and literate English-speakers. He has helped Spanish-speaking priests settle in the United States, connecting them with Social Security, driver’s licenses and bank accounts.
In 2006, Gov. Robert L. Ehrlich Jr. recognized Schreiber for outstanding contributions to the state’s Hispanic population.
“I guess I had the type of mind that if I saw a problem, I had to figure out how to solve it,” Schreiber said of his extensive involvement.
Schreiber is a dedicated volunteer, said Francisco Plasencia, Esperanza’s client services and outreach manager.
“(He) gives the best every time,” he said. “Volunteering for him is not so much about volunteering; it’s about the greater good that he can do.”
“I see Jerry as a person with a very strong faith who sees this as his ministry, in a way, to give back to the community, but also work in God’s will for these people,” he added. “This is kind of a mission for him.”
On an afternoon in late March, Schreiber sat at a table in the Esperanza Center with 20-year-old Edwin Joel Cruz-Aguilar, who recently emigrated from Guatemala. The pair reviewed the previous week’s lesson: adverbs, words for familial relationships and useful phrases.
On that day, Cruz-Aguilar wanted to grow a vocabulary that could help him get construction work. Schreiber translated the names of common tools, and Cruz-Aguilar repeated them.
It’s easier to work with students such as Cruz-Aguilar, who can read and write in Spanish, Schreiber said.
“You have to have a lot of patience, and you have to have a lot of determination, and you have to be willing to do the teaching, and hope and pray that it works in the end,” he said. “You have very limited control.”
Schreiber said his volunteerism was never the known goal, but the culmination of a series of his life’s events, including that train accident.
“What surprises me is looking back at the beginning and all the little turns and how it’s all worked out,” he said.
Also see:
The Lord’s Ladies: Holy Family parishioners meet for coffee, camaraderie
Copyright (c) April 12, 2013 CatholicReview.org
PrevNext