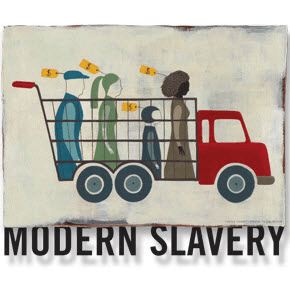 For four years, “Kiki” worked around the clock seven days a week, slept for no more than four hours each day and wasn’t guaranteed her next meal.

Kiki, 29, was a victim of human trafficking for sexual exploitation at hotels up and down the East Coast. Forced to work as a prostitute, she brought in up to $8,500 each week, which she handed over to her trafficker.

Religious and secular organizations alike are working to raise awareness about and bring an end to the scourge that afflicts people such as Kiki, a Baltimore resident who requested that her identity be concealed to protect her safety.

According to Baltimore-based Catholic Relief Services, more than 12 million people are trafficked in 161 countries.

Trafficking for labor or sex is one of the fastest-growing criminal industries that targets men, women and children in the U.S. and abroad, according to the Polaris Project, a Washington, D.C. nonprofit that combats human trafficking.

Baltimore sits in the middle of the Interstate 95 corridor, a hub for traffickers in a region easily accessible by automobile, plane and boat. According to human trafficking experts, victims of labor and sex trafficking are seen at truck stops, malls, restaurants, hotels and massage parlors, among other locations.

According to news reports, a Baltimore County house of prostitution – midway between the Beltway and St. Michael the Archangel in Overlea – with Asian immigrants was raided in 2011.

The Maryland Human Trafficking Task Force, which works to create a law enforcement and victim service presence, was formed in 2007. Daughter of Charity Sister Carol Durkin in Emmitsburg represents her congregation on the task force.

The U.S. Attorney’s Office for the District of Maryland coordinates the task force, which often meets at the Baltimore office, LeDuc said. There isn’t a specific location for the task force, an umbrella for federal, state, local and non-governmental organizations.

According to news reports, 23 men were recently arrested and charged with allegedly soliciting sex from undercover police officers along Route 1 in Jessup.

Human trafficking “is far more prevalent than we realize,” said Jeanne Allert, executive director of The Samaritan Women, a Maryland-based Christian nonprofit that works for social justice against human trafficking.

“Demand is ultimately the issue. The supply will always be there, if there is a demand.”

Alsy Acevedo, a CRS communications officer for Latin America and the Caribbean who works with human trafficking abroad, said education and prevention are key.

“It is very important to educate young women and families as well on this,” Acevedo said. “Poverty is world spread – it doesn’t matter if it’s in the U.S. or Peru or India – it (human trafficking) will happen because it’s basic human nature to want to improve themselves.”

Rosemary Thompson, executive director of the P. Francis Murphy Initiative for Justice and Peace – housed at the Mission Helper Center in Towson and the voice of 14 religious communities that work for social justice – echoed that education is a “No. 1” priority.

“We have got to put a light on it,” said Thompson, who speaks to youths at parishes across the Archdiocese of Baltimore about trafficking and the Murphy Initiative, named for the late Baltimore auxiliary bishop. “It’s this hidden world we’re trying to expose. If we don’t see God’s poor, how can we serve God’s poor? We as a church can’t be separate from the world of commerce.”

“We look at the global problem but I spend more time on the local problem,” Strausbaugh said. “It’s slavery. It’s the worst kind of brutality and exploitation that I can imagine.”

Strausbaugh said Americans need to know that “pimp-controlled prostitution is trafficking. We’ve given a cultural pass forever to prostitution.”

In the U.S., the average age of trafficked girls is 11, Strausbaugh said.

Strausbaugh is a parishioner of St. Matthew, Northwood, where the residents include Comboni Missionary Sister Ilaria Buonriposi, who represents her congregation at the United Nations in New York and works on justice and peace issues.

“Most people who are trafficked don’t recognize themselves as victims,” Sister Ilaria said. “Usually victims of trafficking are terrorized people.”

Undocumented migrants, who are often victims of labor trafficking, don’t know where to turn for help, Sister Ilaria said.

“They don’t dare go to the police because they think they will be deported,” said Sister Ilaria, who called the U.S. a “destination country.”

St. Matthew, a multicultural parish with parishioners from 45 countries, offers immigrants a familiar face for them to identify with, Sister Ilaria said.

“It makes it easier, the healing process,” said Sister Ilaria, whose congregation is a member of the Murphy Initiative. “It’s something St. Matthew can offer.”

The parish has a cross-cultural team that works to educate parishioners about the issue and the nonprofit Immigration Outreach Service Center (IOSC) at St. Matthew serves immigrants, refugees and asylum seekers.

No parishioners of St. Matthew are known victims of trafficking, but “you don’t know what they’ve (immigrants) been dragged into,” said Pat Jones, an IOSC volunteer and board member.

Victims might not speak English. They typically isolate themselves and appear fearful, battered and malnourished.

Kiki, who is seeking refuge with the help of The Samaritan Women, is an anomaly of sorts, said Allert, the nonprofit’s executive director.

“Kiki is in the minority who will speak as candidly as she has,” Allert said. “There’s so much chained to it.”

No longer a victim, Kiki is a survivor affiliated with The Samaritan Women, Allert said.

“Part of our emphasis is on helping women like Kiki create a new life for herself and be able to put this behind them,” Allert said. “We need to not dwell on their past and focus on their future.”