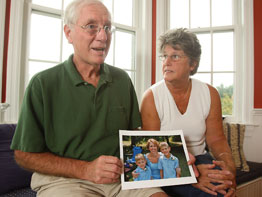 John and Gat Meredith planned on marking the first anniversary of their daughter’s death quietly.

Instead, it will be spent with more than 300 friends, family and well-wishers Sept. 13 at the Jessica Meredith Jacobsen 5K Memorial Run and walk, which starts at Immaculate Conception, Towson, their home parish.

The Cockeysville couple expect to be smiling through tears on race day, 24 hours before the anniversary of their daughter’s death.

“I think it will be sad for us,” Mrs. Meredith said. “It’ll be emotional. It makes me feel good to know even in her death there’s a lot of good coming. It makes you feel present in some sort of way.”

Jessica, the oldest of their four children, was 37 when she was shot and killed by her husband, Jeffrey Jacobsen, in front of her Timonium home. Mr. Jacobsen then killed himself, as the couple’s two young sons, Matthew and Christopher, sat in a nearby car.

Proceeds from the race, which is being sponsored by the Father O’Neill Council, Knights of Columbus No. 4011, will go toward the Immaculate Conception School tuition assistance fund; the House of Ruth, which assists women and children affected by domestic violence; and Father O’Neill Council charities.

The beneficiaries of the race were special to Mrs. Jacobsen, an avid runner and accountant whose sons continue to attend Immaculate Conception School.

The Merediths said that their daughter was the kind of person who, while experiencing marital problems, contacted her in-laws to ensure that her husband had support.

“She would go out of her way to do anything for you,” Mrs. Meredith said. “If you needed something done, we always went to Jessica. You always immortalize people after they die, but I never really realized how wonderful she was. She is what everyone wants their daughter to be.”

The Power of Faith

The Meredith family has been a constant at Immaculate Conception since 1975. It’s where Dr. and Mrs. Meredith raised their children, Jessica, Hillary, Emily and Joseph. Jessica was active in the parish until her death.

Dr. Meredith plays the bass and cello in the church’s contemporary music group, while Gat was the liturgy chairperson for seven years and is currently an extraordinary minister of Holy Communion. They have also sponsored couples intending to marry.

“They’re a model for what a Catholic family can and should be,” Mr. Myers, a parishioner of Immaculate Conception, said.

In the weeks and months that followed Jessica’s death, support came from parish and school families.

“I’ll be giving out Communion and someone will say, ‘I’m keeping you in our prayers,’ ” Mrs. Meredith said.

Despite attending daily Mass, there are times when Mrs. Meredith admits to anger.

“I can be driving down the road going to church and there are days that I’ve yelled because I’m so frustrated,” she said. “I always stop and think, ‘You know what, God? At least I’m talking to you. You may not like what I’m saying, but I’m talking to you.’ ”

At that recollection, Mrs. Meredith paused to collect herself.

“I had that one person in my life 37 years,” she said. “I was so fortunate to even know her. I have two lovely grandchildren from her.”

Pick up the pieces

“There are some days when I think, ‘I cannot believe we’re living through this and I cannot believe she’s not going to walk through the door,’ ” Mrs. Meredith said. “If you can’t turn this around to some good, how can you possibly get through it?”

They find hope and motivation in Christopher, 8, and Matthew, 5.

“We want them to have as good and stable an upbringing as possible,” Dr. Meredith said.

They have also leaned on their faith.

“They’ve shown tremendous courage,” said Father Michael Foppiano, associate pastor of Immaculate Conception. “Your faith can speak in those moments when you need that courage. It would be so easy to be completely devastated and just fall to pieces, and they didn’t do that.”

Before her death, Mrs. Jacobsen had asked her sister, Hillary Hennighausen, to raise the boys if something happened to her. Despite having given birth to her own son, Owen, just prior to her sister’s murder, Mrs. Hennighausen readily accepted the role.

She left her job as a teacher at Notre Dame Preparatory Middle School in Towson and is pregnant with a second son, due in December.

“I don’t want to take my sister’s place,” Mrs. Hennighausen said. “I want them to know they have a heaven mommy and an earth mommy.”

The Merediths say the boys play sports and enjoy life, just as their daughter would have wanted.

“That’s the miracle,” Mrs. Meredith said. “They’re going to have a normal life after having gone through something like that. She (Jessica) loved the boys. They were really the light of her life. They are what keeps us going.”