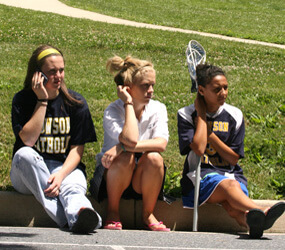 As the sun started to set, a group of about 30 students, parents and alumni gathered to make sense of the news of day. Earlier, rumors circulated on the Internet that their beloved school was closing.

Facebook.com status postings like “TC closing?” were attention-grabbing. Members of the school community began text messaging each other. Some read a blog online that appeared to make the news official.

By late afternoon, the Archdiocese of Baltimore confirmed the closure of the 87-year-old school.

Once the news was official, many who had been communicating throughout the day decided to assemble at Towson Catholic to vent and mourn the loss of the archdiocese’s oldest co-educational high school.

“I kind of knew we were having problems, but I didn’t expect that we were going to close down,” said rising sophomore Liz Greer, who admitted to crying upon hearing the news. “I just wish we had more warning.”

Many from the July 7 gathering returned the next day to speak with faculty and staff who were being told of the school’s closing.

Fellow 2007 graduate Wendy Gelhaus said she “always felt a sense of community” at the school and wanted it to survive.

That intimate approach to education is what attracted many students to the school.

“I never expected this,” rising sophomore Mariah Bowen said. “It was like a little family. Everyone knew everyone.”

Tom Whedbee, Towson Catholic’s director of guidance, will be the contact person for transcripts, letters of recommendation and other student assistance. The archdiocese is attempting to help faculty land jobs.

Students and families now face the difficult task of trying to find a new school in a short time period. Towson Catholic will host a meeting for them July 14 in the school auditorium.

Staff from schools in the archdiocese will be there to provide information about their institutions. Many parents and students worried if those schools could match Towson Catholic’s tuition costs, which was $9,500 plus fees in 2009-2010.

Asked where she would attend school, Mariah said: “I actually have no clue. Maybe we’ll need to move. I don’t know how easy it’s going to be to be accepted to another Catholic school this late. We’re definitely stuck in a spot.”

Janet Brown (nee Rettberg) graduated from the school and had a son who was enrolled as well. She and her siblings attended the school during the late 1960s through the early 1980s.