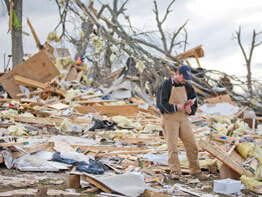 A series of tornadoes brought death and destruction to several communities in the mid-South. As of midday Feb. 7, 56 people were confirmed dead as a result of the rare winter twisters.

Arkansas and western and middle Tennessee bore the brunt of the Feb. 5 tornadoes, although funnel clouds also touched down in Mississippi, Alabama, Kentucky and Missouri.

According to Greg Standish of Catholic Mutual Group, no parishes or schools in the Diocese of Little Rock reported tornado damage, but several buildings were damaged by high winds.

Father Hardesty’s church was about half a mile from the tornado and was not damaged. The parish hall was opened to anyone needing a place to sleep overnight.

The diocese scheduled a special collection for the weekend of Feb. 9-10 to raise money for its disaster relief fund.

“Let us keep in prayer all those whose lives have been shattered in the span of a few destructive minutes,” Monsignor J. Gaston Hebert, diocesan administrator, wrote in a letter to be read from the pulpit that weekend.

Money from the fund will be forwarded to parishes to pay businesses for their services and products for affected residents.

Catholic Charities of Arkansas was formulating a plan on where to open long-term recovery centers. Volunteer parish teams will be trained in several areas to do case management and assist people to their needs.

The training will be handled by the employees of the diocese’s Hurricane Recovery Office, which operated similar teams to assist victims of Hurricane Katrina.

Some believe lightning never strikes the same place twice, but in Tennessee one family knows what it is like to be hit twice by tornadoes.

Brian and Lisa Vaske, members of Our Lady of the Lake Parish in Hendersonville, Tenn., a Nashville suburb, had their old home in Gallatin, Tenn., destroyed by a tornado in the spring of 2006.

Their new home in Castalian Springs, Tenn., was in the path of the Feb. 5 storms. After seeing television reports that storms and possible tornadoes were heading toward them, Lisa Vaske and the couple’s two children, Travis, 6, and Brooke, 4, moved to the bathtub for safety.

“I was laughing at her,” Brian Vaske said with a chuckle a day later. “There’s no way a tornado will hit us twice.”

He said he was watching television when the electricity went out “and my ears popped. I knew what that was, and I jumped in the tub myself.”

The twister caused an estimated $40,000-$50,000 in damage to the house, and knocked down about 30 trees on property they own nearby. “The whole house was shaking,” Brian Vaske told the Tennessee Register, Nashville’s diocesan newspaper.

In 2006, parishioners and students from Pope John Paul II High School in Hendersonville helped the Vaskes clean up the damage. And parishioners were coming to their aid again in the wake of the latest storm damage, he said on Ash Wednesday.

Funds will help provide shelter, food and clothing to those most in need through Catholic Charities agencies in the dioceses of Little Rock; Owensboro, Ky.; Jackson, Miss.; and Knoxville, Memphis and Nashville, Tenn.

Catholic Charities’ officials said contributions to the agency’s tornado relief fund may be made by calling: (800) 919-9338. Donations also may be made online at: www.catholiccharitiesusa.org, by clicking the button “Donate Now.” Checks may be sent to: Catholic Charities USA, 2008 Mid-South Tornadoes Relief Fund, P.O. Box 7068, Merrifield, VA 22116-7068. (Catholic Charities’ federal ID number is 53-0196620.)

– – –
Contributing to this story were Malea Hargett in Little Rock and Andy Telli in Castalian Springs.