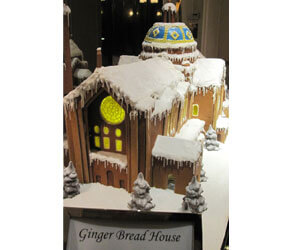 That is because Charles Froke, the executive pastry chef at the Four Seasons Hotel in Georgetown, has recreated the national shrine as the hotel’s 2010 massive gingerbread replication of a Washington landmark.

The gingerbread shrine will be on display in the hotel’s lobby through the Christmas season.

“I’ve made a lot of cool buildings (out of gingerbread) in the past, but nothing like this,” Froke told the Catholic Standard, Washington’s archdiocesan newspaper. “In the past, I’ve done the National Cathedral, the Smithsonian Castle, the White House, the Capitol and Healy Hall at Georgetown University, but this is the most ambitious one to date.”

Froke, a Catholic who attends St. Ann Church in Washington, crafted the gingerbread shrine out of more than 125 pounds of a specially prepared gingerbread dough.

“It is a little more sturdy and not as sweet as regular gingerbread,” the pastry chef explained.

The creation also includes about 55 pounds of icing and 20 pounds of sugar. He used dyes to create the shrine’s ornate blue dome. The stained-glass windows – which are illuminated by electric lighting – are made from colored liquid sugar.

“I was delighted to learn that Mr. Froke chose the national shrine as his subject for this year’s gingerbread artistry,” said Monsignor Walter Rossi, the shrine’s rector. “My hope is that by depicting this great patronal church of the United States, the attention of those who view the ‘gingerbread shrine’ is called to the sacred meaning of Christmas, not only the secular.”

Monsignor Rossi added that he visited the Four Seasons Hotel to view what he called the “masterpiece.”

“I called Mr. Froke to congratulate him on his work and to thank him for choosing the shrine,” Monsignor Rossi said. “Our selection testifies that in addition to being a center of worship for the Catholic Church in the United States, the national shrine is a Washington landmark.”

Froke said it took him about 70 hours to create the gingerbread replica.

But, before he started baking, he spent hours at the shrine, taking photos and making blueprints. Hundreds of individual gingerbread pieces were baked and then put together with “mortar” made of icing.

Although he has been executive pastry chef at the Four Seasons for almost eight years, Froke said he has been making gingerbread houses almost all of his life.

“My mom and I started making gingerbread houses when I was 3 or 4,” he said.

Reaction to the gingerbread national shrine has been overwhelmingly positive, the pastry chef added.

“People have gone crazy for it,” he said. “I got a call from someone who wanted to fly me out to California to reproduce the national shrine there.”

As a Catholic and a pastry chef, Froke said it was his hope that his gingerbread national shrine “earns me some brownie points in heaven.”