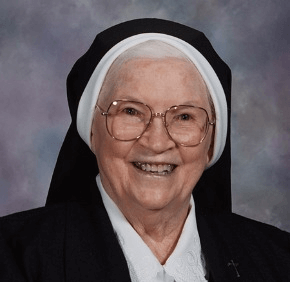 By Maria Wiering
mwiering@CatholicReview.org
ASTON, Pa. – What was it that enticed an Irish girl to join a religious order and move across the world for its work?
“Now let me think. It was so long ago,” said Sister Columbkill O’Connor, a Sister of St. Francis of Philadelphia who spent 52 years in Baltimore.
For that memory, the centenarian searched eight decades in the past, when she was a young adult and intrigued by the Franciscans.
“When I first met them, I thought they were very approachable, and they were very down-to-earth, and I thought they were warm-hearted,” she said. “And here I am, a Franciscan.”
She was taught by Sisters of Charity and watched her older sister join their order, but didn’t think they were the right fit. She saw a newspaper advertisement for the Sisters of St. Francis and wrote to them. They invited her to interview, and then to join. Sister Columbkill said she would, but after Epiphany. Her family had a great time during Christmas, and she didn’t want to miss it.
Now she finds her moxie in telling the nuns that she would join, but at her convenience, amusing.
“I didn’t know anything about obedience,” she said with a laugh, her voice still ringing with an Irish lit.
Obedience, however, brought her across the ocean to Baltimore, where she taught for 52 years.
Adventurous spirit
Sister Columbkill was born Bridie Mary O’Connor. She was the second-youngest of 10 children, all educated in England.
After high school, Sister Columbkill traveled across Europe. She had a hunch she would become a nun, and wanted to see more of the world before she entered religious life.
In 1935 at age 21, she entered her congregation in Mallow, County Cork. A few months later, she was on a ship bound for the United States with nine other sisters.
“They told me at home I was off my rocker,” she said of her decision to go to America. But, on the boat, “we had a great time,” she said.

Every year Sister Columbkill hoped she would be able to return to Ireland to visit, but it was 22 years before that prayer would be answered.
“You can’t get it out of you,” she said of Ireland, tears willing in her eyes. “You don’t see the beauty of Ireland when you live there, when you’re born there. It’s when you someplace else and go back and step down on Ireland, it’s a different feeling. There’s something about that place.”
She hopes to visit Ireland again, and said if there was a bridge she would walk there. It would take her three days to get over it, she said, she’d walk so fast.
Sister ‘Columb’
Sister Columbkill’s friends call her “Sister Columb,” which sounds softer than her professed name. She has disliked since it was given her, despite its connection to one of Ireland’s favorite saints.
“I wish I could change it,” she said. “I’m guess I’m too old now to bother.”
It was the name, however, her students used.
“I should have written ‘Sister Columb’ on the board,” she said. “Forget the rest of it.”
Sister Columbkill spent five decades in Baltimore-area elementary classrooms, including those at Our Lady of Mount Carmel in Essex and Immaculate Conception in Towson. Her favorite was sixth grade.
She also ministered in Wilmington, Del., Philadelphia and Washington, D.C. She earned an education degree at what is now Mount St. Mary’s University in Emmitsburg in 1958.
Her students were good and bright, she said. With 80 students in a classroom, she taught thousands of them.
‘Always kind and loving’
Six of Sister Columbkill’s former students were ordained priests. Several girls, including five Franciscans, also joined religious life.
She also taught Maryland Gov. Martin J. O’Malley as a sixth-grader in Bethesda, whom she recalls as an “excellent student.”
“I knew that fellow would go places; he didn’t need a teacher,” she said, laughing.
Sister Columbkill enjoyed “everything” about teaching, especially music, she said. She spent all day on her feet in the front of the classroom, never at her desk. In her memory, her students never played pranks or misbehaved.
“They were always kind and loving,” she said.
Sister Columbkill taught until she was past 70. She now lives at Assisi House, her community’s retirement home adjacent to the campus of Neumann University.
She spends her days in prayer and participating in her retirement community’s activities.
She has no secrets to longevity; only God knows why she’s lived to 100, she said.
Asked what advice she would give to a women considering religious life, Sister Columbkill was quick to respond: “I’d tell her it was the most beautiful life she could ever have. She’d be free to pray and get closer to God, free from any attachments.”
She said she would choose her same life over again. “And I would be a Franciscan,” she affirmed.
Despite the lifetime that stands between Sister Columbkill and the girl she was when she entered religious life, she doesn’t feel like she has changed.
“I’m now the same as if I were 21, I don’t feel any different,” she said.
Her attitude toward obedience, however, has. She sees it as a freedom.
“God gives you the grace, and you don’t think anything of it,” she said. “You do it, and you’re always happy doing it. They send you out to do something and you do it in obedience, and the Lord blesses you.”
Also see:
Centenarian and pathology pioneer reflects on career and vocation
Vocation Awareness Week: Advice from Father James Martin, S.J., a Dominican sister and a Baltimore deacon
PrevNext