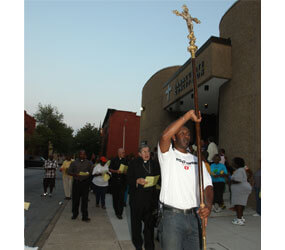 As a parishioner of St. Veronica in the oft-troubled Baltimore City neighborhood of Cherry Hill, she is active in trying to reach out to the youth of the parish.

Violence in the city has tested the faith of many who have attempted to combat it. The seemingly endless string of obituaries can wear them down.

Standing in the hallways of St. Mary’s Seminary and University in Roland Park, McClain was asked what she has wondered to herself.

“I don’t want to see anybody else die,” she said, choking back tears. “There have been too many funerals and so much potential lost.”

It was a refrain repeated by many Archdiocese of Baltimore leaders, pastors, parishioners and youths May 27 when they gathered for a conference at the seminary to discuss bringing about peace in the city.

The matter is pressing. According to data released by the Federal Bureau of Investigation June 2, Baltimore had the highest murder rate among large U.S. cities in 2008 with 37 homicides per 100,000 residents.

Many of those deaths were young people.

Auxiliary Bishop Denis J. Madden, whose St. John Neumann Vicariate includes the city, has been at the forefront of the peace discussion for several years. He recently met with the city’s police commissioner, Frederick H. Bealefeld III, and other city religious leaders to discuss their role in reducing violence.

Many of those same faith leaders met with Archbishop F. O’Brien May 27.

Bishop Madden ate pizza with a group of young men during a dinner break at the meeting. He wanted to get their thoughts on bringing about ending violence in the city.

Rudy Dehaney, a 21-year-old parishioner of the Church of the Blessed Sacrament, said he told Bishop Madden that “peace can only be taught to someone who is rational and moral.”

Bishop Madden said people of the archdiocese must start looking at violence as a community issue. The all-parish meeting was the first step.

“I’m hoping we can move in that direction,” Bishop Madden said. “I have the distinct feeling that this group will make a difference. The city will be a blessed place because of this meeting.”

The archbishop has designated the weekend of June 19-21 a “peace sabbath” across the archdiocese and has asked that parishioners give $1 during a peace collection that will benefit groups like Safe Streets.

Those witnessing the plight of the city say religious leaders can make a difference.

“It’s critical,” McClain said. “When the average person sees the bishop and the archbishop walking the walk, it’s much more important to be involved.”

Janell Thomas, the violence prevention coordinator for Safe Streets, said Father Augustine Etemma Inwang, a Missionary of St. Paul of Nigeria, who serves as pastor of St. Veronica, has “been a tremendous help,” to her organization. Safe Streets often uses his parish as a base as it utilizes former criminals and offenders as mentors to at-risk youth.

Thomas, like McClain ponders the bigger picture every day.

“I do it every day because I feel like one life can change so many,” Thomas said. “If I can help one young man get a job and keep him off the streets, then I didn’t just change his life, I changed his family’s life. That family will change the community.”