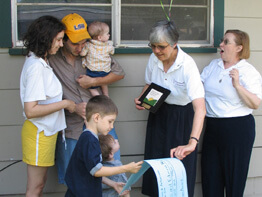 LITTLE ROCK, Ark. – The Hurricane Recovery Office for Catholic Charities of Arkansas is continuing to assist hurricane evacuees with settling in Arkansas, but money and time are running out.
The office announced it will remain open until March 31, six months longer than expected, thanks to a grant extension from the federal government.

The Hurricane Recovery Office opened in September 2005 following Hurricane Katrina on the Gulf Coast and Hurricane Rita, which hit the Texas and Louisiana coasts.

Initial funding for the Arkansas program came from a $750,000 statewide collection at Catholic parishes as well as grants and donations. The three-woman office was assisted by volunteer parish teams in 42 parishes. Each team could request a $10,000 block grant to assist evacuees in their cities.
The program was expanded in March 2006 with a $428,000 grant from the Federal Emergency Management Agency.

With the grant, Catholic Charities of Arkansas was able to hire five regional case managers and pay them through Sept. 30, 2007. Because some federal money remained, Catholic Charities USA, which managed the grants given to 27 dioceses that staffed offices similar to the one in Little Rock, gave the Arkansas offices more federal funding Aug. 15 to stay open an additional six months.

Also staying open until March 31 are offices in the dioceses or archdioceses of Baton Rouge, La.; New Orleans; Jackson, Miss.; Springfield, Mo.; and Austin, Tyler and Houston, Texas, according to Catholic Charities USA.

At least 10 other dioceses or archdioceses in eight states will be closing their programs between October and December.

Sister Joan Pytlik, a Daughter of Charity who directs the Little Rock program, said her office has helped at least 900 households in the past two years. Immediately following the hurricane at least 60,000 people moved into the state. A year later, the number dropped to 35,000.

When the Hurricane Recovery Office opened, it was focused on helping people with immediate needs, such as housing, utilities and food. In July 2006, the office stopped being a relief program and transitioned into helping people with creating long-term recovery plans for how they would settle in Arkansas or elsewhere.

Sister Joan said her office will be sending letters to each family they assisted to let them know of the office closing.

“We are going to have to start planning to close cases and see that people get what they need,” she said.

Jamie Deere, case management coordinator, said case managers today want to help families with recovery plans, not providing only financial assistance. She said money is still available from Catholic Charities to help with relocation costs, such as renting a U-Haul, but she said case managers can no longer pay for basic needs, such as food or rent, because only limited funds are available.

Sister Joan said the Arkansas program has been held up as an example of good stewardship because early on it formed volunteer teams to help evacuees with their resettlement. Catholic Charities of Arkansas trained 199 volunteers in the state over the past two years to work with evacuees.

After the office closes, Sister Joan said she hopes some of these volunteers will be able to continue to minister in case another natural or man-made disaster impacts the state. She also expressed pride in the volunteers who have given two years of their lives to the program.

“There is no way we could have served all of those people with six case managers all over the state,” she said. “We are viewed by so many evacuees really as the face of God to them. People received gentle care, helpful care. I can’t say enough about the volunteers. They didn’t have to do it.”