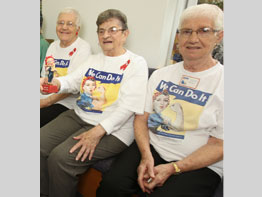 In the early 1940s when women wore dresses instead of pants and worked inside the home, a phenomenon occurred – Rosie the Riveter applied for a job.

Vera Green was a Rosie the Riveter whose job it was to build rudders on U.S. Navy war planes at Eastern Aircraft. The St. Ignatius, Baltimore, parishioner riveted and welded in a full-time position covering three shifts.

Despite strict inspectors, she said, “We loved it. We had a good time. We knew the job wasn’t permanent.”

The general attitude of the mostly female workforce at the company was a united one. “Everyone was in the same boat,” said Mrs. Green, sporting a white Rosie the Riveter ‘We can do it!’ icon T-shirt, matching her friends and fellow Rosies, Marie Riley and Leona Bartholomey, both parishioners of St. Rita, Dundalk.

Now widowed, the three women are neighbors in the same building in Dundalk and members of the American Rosie the Riveter Association.

“White, black, Jewish – it didn’t matter; we all worked alongside one another, focused on one goal,” she said. “People were very patriotic.”

Now with short white hair, much different than it looked when at age 17 she began work, Mrs. Riley remembered her employment in the parts department at a U.S. Army Airforce base in Fairfield, Ohio, where her brother was stationed.

She and her 16-year-old sister applied together and remained there for more than a year – abandoning school and their hometown of California, Pa.

“They needed people,” she said. Her duty was to escort civilians and servicemen in the warehouse as they searched for specific plane parts.

“People just couldn’t wander around,” she recalled. She then returned to Pennsylvania and later worked at Corning Glass packaging Navy and Army coffee mugs, and shades for kerosene lanterns.

The war was a time that required waiting, a time of patience. As did Mrs. Green and Mrs. Bartholomey, Mrs. Riley checked the mail daily with the hope of receiving the next handwritten letter from her boyfriend-turned-husband.

Mrs. Bartholomey, now 84, had then been recently married at age 18, and lived with her in-laws while her groom was shipped to the front line in 1942.

“Every day I waited for the mailman and listened to the radio” after her shifts at Martin’s and then Eastern, she said.

“I wondered where he was,” she said. “Soldiers tried to give hints in their letters as to their whereabouts, but every one was censored – blocked out or cut out – by the government. ‘Loose lips sink ships’ was the saying.”

The Rosies at work shared letters and hope. Some learned their husbands would not return home. The holidays were the hardest; they sent care packages, yet some boxes never made it into the hands of their soldiers.

“Though that third shift was a kicker,” laughed Mrs. Bartholomey, “I loved being a Rosie the Riveter. I’d do it again to help out our soldiers.”

In blouses and overalls supplied by the company, she worked on the aft-tail section of PBM planes, crawling in with a riveter gun.

“It was hard work, but we didn’t mind,” she said, “because my husband was in the Army, and I hoped he would come home.”

Each of their heartthrobs did return.

Mrs. Riley was waiting for a streetcar on the streets of Pittsburgh in May 1945 when she heard the news: “The war is over!”

“Everyone was hugging and crying,” she remembered.

President Truman made the announcement on the radio, said Mrs. Green.

Over the summer, the friends participated in Dundalk’s Fourth of July parade.

“All the men were giving us the thumbs up,” said Mrs. Bartholomey, “thanking us.”