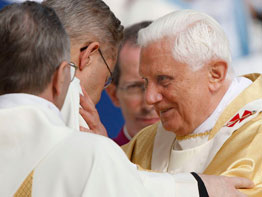 LOURDES, France – From an altar ringed with wheelchairs and stretchers, Pope Benedict XVI encouraged thousands of sick people at Lourdes to seek solace in Mary’s smile and maternal love.

Their devotion to Mary at a time of need is not “pious infantilism” but a sign of the highest spiritual maturity, the pope said Sept. 15.

It was the pontiff’s last day in France and he dedicated it to the ill and infirm, who packed Rosary Square at the Marian sanctuaries in the Pyrenees town of Lourdes.

The pope administered the sacrament of the anointing of the sick to 10 people during the liturgy. Addressing each by name, he gently anointed their foreheads and hands with oil and invoked the mercy of the Lord.

The group receiving the sacrament included men and women, young and old, who met for the first time before the liturgy. As the youngest among them, a German girl, sat waiting for the Mass to begin, an elderly French nun in a wheelchair next to her reached out and held her hand.

Behind them stretched hundreds of the distinctive covered blue wheelchairs used to transport many of the sick at Lourdes. Most were there for the pope, but all had come to pray to Mary.

“I get a great feeling of well-being here. I’m in touch with God through Mary, right here in Lourdes,” said Frank Nelson, a 72-year-old Irishman, who has been coming to the sanctuary since 1948.

Seated in a wheelchair next to others in his pilgrim group, he added that he also has come for “some healing,” after undergoing two hip operations, stomach surgery and treatment for prostate cancer.

In his sermon, the pope said devotion to Mary can help break the isolation of suffering. Far from being an act of “outmoded sentimentality,” he said, turning to Mary demonstrates that people “know precisely how to acknowledge their weakness and their poverty before God.”

He recalled that St. Bernadette Soubirous, who experienced visions of Mary 150 years ago in Lourdes, first noticed Mary’s smile. This smile remains a source of hope for many who endure illness and distress, he said.

“Unfortunately, we know only too well: The endurance of suffering can upset life’s most stable equilibrium, it can shake the firmest foundations of confidence,” he said.

Sometimes it can even lead people to despair of the value of life, he said.

“There are struggles that we cannot sustain alone, without the help of divine grace. When speech can no longer find the right words, we need a loving presence,” he said.

Mary’s smile offers strength to fight against sickness, but also the grace to accept “without fear or bitterness” the hour of one’s death, he said.

The pope, who visited Lourdes as a cardinal in 1981, also spoke of the attraction of Lourdes’ spring water, which many pilgrims bathe in or drink in search of a miraculous cure. The church has recognized as miracles 67 cures attributed to Mary’s intercession at Lourdes, but pilgrims believe many more undocumented miracles also have occurred.

The pope did not talk about miracles, but said the spring water at Lourdes is a sign of a spiritual reality that has helped many pilgrims.

“By immersing themselves in the baths at Lourdes, how many people have discovered and experienced the gentle maternal love of the Virgin Mary, becoming attached to her in order to bind themselves more closely to the Lord,” he said.

The pope made a point of thanking the many people who accompany the sick to Lourdes and help care for them during their stay. These volunteers “are the arms of the servant church,” and so are the many Catholics around the world who regularly visit the sick, he said.

Before the Mass, the pope continued his “jubilee pilgrimage” in Lourdes, stopping to pray at a hospital chapel where St. Bernadette made her first Communion.