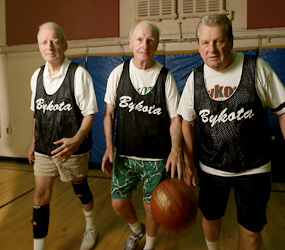 Move it or lose it.

That theme applies to a basketball team from Towson that does get around.

Gil Hoffman, Frank Lastner and Paul McGillicuddy have ties to local parishes, but the Archdiocese of Baltimore will be in the figurative rear-view mirror come August, when the men head to California for a national tournament.

On a five-man squad that competes three-on-three, Mr. Hoffman is the youngster. He’ll turn 76 in September, a month after his team competes in the 75-79 age group at the National Senior Olympics at Stanford University in Palo Alto, Calif.

At a vintage when too many limit exercise to mall-walking or hops in and out of a golf cart, these guys barrel down the basketball court three days a week at the Bykota Senior Center. Why risk a pulled hamstring, let alone a more serious malady, for the sensation of making a three-pointer or setting a crisp screen?

“We love it,” Mr. Hoffman said. “It’s great camaraderie, to begin with. We have as much fun afterward when we get something to eat, getting on each other.”

He grew up in northeast Baltimore, playing near old St. Paul, what is now St. Francis Xavier. Mr. Hoffman rarely picked up a ball as he and his wife, Loretta, raised a family. After retiring from his law practice, he found himself lured back to the game.

“Other than the occasional shoot-around at the basket on the garage, I didn’t do much of anything in the way of fitness before I started playing with the guys in 1999,” Mr. Hoffman said. “This keeps us going, and there are plenty of fringe benefits. How many guys get to play with their grandsons?”

Mr. Hoffman is the father of four, grandfather of 12, a lector at Immaculate Conception in Towson and the president of the Catholic Men’s Fellowship of Maryland.

Mr. McGillicuddy, a Boston native who went to Harvard University, came to Baltimore to direct employee relations at a large firm. At 78, he can remember when the game wasn’t just played below the rim, but firmly on the hardwood.

“I didn’t start playing basketball until I was about 30, and that turned out to be an advantage,” said Mr. McGillicuddy, a parishioner of Holy Cross in Federal Hill. “I learned to shoot a jump shot, whereas most of my contemporaries were using the set shot, with both feet on the ground.

“At my age, I’m playing with people who normally shoot with their feet set.”

An outfielder on a softball team that has won several senior national championships, Mr. McGillicuddy espouses a balanced lifestyle.

“I always preach to take care of yourself,” said Mr. McGillicuddy, who has six children and 18 grandchildren. “So many are involved in their career and family – they neglect to take care of themselves.”

Mr. Lastner, a retired insurance executive, played for what are now Loyola Blakefield and Towson University. He’s a parishioner of St. Joseph in Cockeysville.

The other members of their team include Alan Goldstein, who covered the old Baltimore Bullets for The Sun until they left town in 1973, en route to becoming the Washington Wizards, and William Klemm, a retired meat cutter.