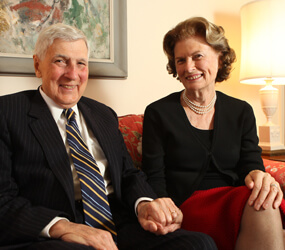 Herb Hubbard’s collectibles include busts of Beethoven and Mozart.

She came to the United States from England in 1957, but never lost her British accent or interest in seeing the world.

He too developed a keen travel bug, albeit colored by a stint inside the Arctic Circle with the U.S. Army Air Force during World War II that he says “prejudiced me against the cold.”

When his wife died in 2001, she had been widowed for a year.

There are as many reasons to reside at Blakehurst as there are acres on the Towson property – 40, for those counting. Some are attracted by the cultural offerings and fellowship, others by the food and recreational amenities, others by the security and serenity of the surroundings.

Then there are those, like Pierce and Hubbard, who came upon love.

“It’s fantastic, I don’t know how to explain it,” Hubbard responds. “We had totally different lives, then to be alone. … ”

A conversation with the couple becomes a session of he said, she said, as the two share banter, an intellectual curiosity and a penchant for finishing the other’s sentence.

“We play gin rummy every other Wednesday,” he said.

“I go to exercise class three days a week, for 45 minutes,” he said.

“We’re faithful to that,” she said.

Hubbard and Pierce had fascinating, full lives before they met and formed a bond.

Born and raised in England, Pierce moved to the U.S. with her first husband, Dr. Frederick L. Richardson, the first director of what is now the Kennedy-Krieger Institute. She later married Leslie H. Pierce, the founder of the Retina Clinic at what is now the Wilmer Eye Institute, another affiliate of Johns Hopkins.

“We came (to Blakehurst) because he (Pierce) was getting frail,” she said of their 1999 move to the community on Joppa Road. “He enjoyed his two years here.”

She taught language arts at Bryn Mawr School from 1967 to 1984, read to the blind, volunteered as a consumer protection advocate for the state and still enjoys worshiping at the Shrine of the Sacred Heart in Mount Washington. Pierce has two grandchildren in college, and two more at the Gilman School.

Hubbard, 87, grew up near the intersection of Guilford and Lanvale in Baltimore and was a 1939 graduate of Baltimore City College, where his classmates included William Donald Schaefer. World War II interrupted his legal studies, sending him to weather school and then to the northernmost reaches of Canada.

Hubbard’s career in corporate law took him to what is now the firm of Saul Ewing. He continues to work 25 hours a week, as the general counsel for Forest Haven, a 161-bed nursing home in Catonsville.

Hubbard has grandchildren and a second home in Florida, but found a huge void in his life when his wife of 54 years, the former Joanne Nottingham, died in 2002.

Moving to Blakehurst as a widower, he heeded some advice and called on Pierce.

“We had a nodding acquaintance, as Lesley and my wife, Joanne, actually had belonged to the same garden club, the Garden Workshop in Roland Park,” Hubbard said. “When I moved here, a friend of mine who knew Lesley said ‘why don’t you look her up?’ We met. It was a good idea.”

They found much in common, beyond the Oriental pieces in their respective art collections.

Hubbard and Pierce consider their life together to be enriched by their surroundings.

“When we go to dinner at a restaurant, we invariably compare it to the food here,” she said.

“We’ll usually say it’s not as good as Blakehurst,” he said.

“We go to the symphony and concerts together,” she said.

“The shuttle bus here takes us to the Meyerhoff,” he said.

“Did we mention being in the chorus together?” she said. “He’s a tenor, I’m a soprano.”