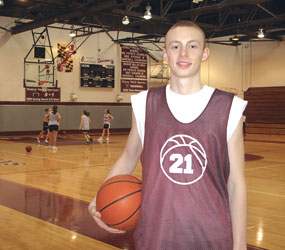 CUMBERLAND – Most Friday evenings in Lent, Pat Jones can be found at his home parish, St. Michael in Frostburg, helping at its fish fry.

That won’t be the case March 18, however, when Jones has, well, bigger fish to fry.

A 6-foot-3 junior, Jones is an integral part of the basketball team at Cumberland’s Bishop Walsh School, which will serve as the host institution in the 51st annual Alhambra Catholic Invitational Tournament, March 17-19 at Frostburg State University.

Competing against powers such as De Matha of Hyattsville and the best of the Baltimore Catholic League is a great challenge – Bishop Walsh last won a game in the eight-team tournament in 1996 – but the Spartans do leave an impression with their effort.

That was the case with Jones last year, when he earned the “Boy Who Wouldn’t Quit Award” with his hustle.

“That was awesome,” Jones said. “When I heard my name called during the trophy presentations, I didn’t know what it was for. … I try to keep a mindset that nobody can stop me, but going into Alhambra, you have to be optimistic and realistic at the same time. Play your game, don’t do anything flashy.”

That steady approach is appreciated not just on the basketball court, but in the hallways of the Archdiocese of Baltimore’s only Catholic high school west of Hagerstown.

“Pat brings a great sense of humor to the student body and a quiet brand of leadership to all aspects of his stay here at Bishop Walsh,” said School Sister of Notre Dame Phyliss McNally, its principal.

Jones is an honors student, with a cumulative grade point average of 3.7. His course load includes AP Chemistry.

“The thing I like about Bishop Walsh is its size,” Jones said, of a school with 46 seniors. “You get to know everyone, and your teachers always have time to give you the individual help you need.”

In basketball, he averages 14 points and 9 rebounds, second to Quincy Redman in both statistical categories.

Jones points to his parents as strong influences. His mother, Jennifer, teaches pre-schoolers at St. Michael, and his father, Ed, is one of the coaches of his AAU team, the Maryland Spartans.