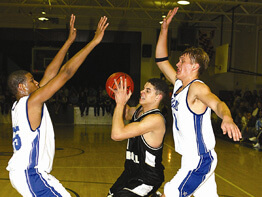 Young , hungry and on the move; the John Carroll, Bel Air, Patriots boys basketball team is making its mark on the hardwoods in the Maryland Interscholastic Athletic Association’s B Conference.

After a tumultuous 0-25 record during the 2004-2005 season, head coach Tony Martin came on board the following season, offering a promising future for the Pats program. True to his word, Martin’s inaugural year, the 2005-2006 season, yielded a 15-22 finish; the tide was turning.

Martin credits this turn-around to the commitment of the school’s administration, coaching staff and the student-body. “Our fan-base is awesome. Sometimes they remind me of the Cameron Crazies. They are bought-in and these are exciting times,” said Martin.

In 2006-2007, the Patriots returned 11 players and are now 10-3 in league competition and 22-5 overall, creeping up into the Metro Prep polls, recently breaking into the Top 15 during the week of Jan. 24. In fact, their success is further highlighted by a recent non-conference 68- 44 routing of the Bowling Brook Thoroughbreds, which gave the Patriots their 22nd win on the season to tie a school record for most wins in a season, originally set in the 1984-85 season, when the Patriots finished 22-5.

This year, Martin and his Patriots have embraced “A love of the game, a passion for our team and a desire to compete at the highest level”, as their season’s theme.

That theme truly reflects who head coach Tony Martin is. With 19 years of coaching experience under his belt, Martin is credited with rebuilding the Archbishop Spalding, Severn, boys basketball program prior to coming to John Carroll and had spent several years working with Pat Clatchey at Mount St. Joseph High School, Baltimore, as well as the late O. Ray Mullis at The Cardinal Gibbons School, Baltimore.

The 06-07 John Carroll team is extremely versatile, as the Pats can easily go ten-deep at any given time. The team is led by senior co-captain, Stan Budzynski, a power-forward and sophomore co-captain and forward, Isaiah Philmore; both are hard working players, point producers and tough in the paint.

Freshman Josh Selby is handling the point guard slot for the Pats this season, a tall order for a young player. But Selby’s competitive drive, willingness to learn and double- threat presence has been key. “The thing about Josh is that his game rises as the competition rises,” said Martin. Both Selby and Philmore are both averaging 18 points per game.

Seniors Alex Edwards and Ryan Horka join Budzynski as the only seniors on the team, each are solid contributors. Juniors D’Metric Evans, 7-foot-4 Jakub Kusmieruk, 6-foot-8 Josh Wiegand and 6-foot-5 Mike Maczko have been mainstays for the Pats thus far, coming up big on both ends of the court.

Well-balanced, highly successful and full of desire to succeed, the Patriots will move into the MIAA A Conference in 2007-2008 and are anxious to take their game to the next level.