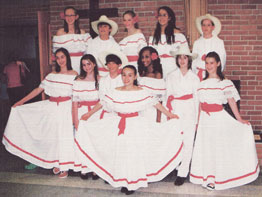 On April 18, The Sacred Heart School gym and West Room in Glyndon were alive with song, dance, and food. More than two hundred people attended the school’s first Fiesta Latina, which included folk dances by student groups and a Parade of Nations. Students from kindergarten and sixth, seventh and eighth grades dressed in costumes of the countries of South and Central America and the Caribbean.

Entertainment was provided by Sacred Heart students and by the Latin American community, including a dance group from Jalisco, Mexico. Food from many Hispanic countries was provided by volunteers and from local restaurants such as Que Rico.

At the conclusion of the entertainment, the eighth-graders led the gathering in the prayer of St. Francis, in Spanish.

The students prepared for this event throughout the school year, learning about the language and cultures of the many countries to the south. There was a colorful display of Mexican paper flowers made by the sixth-graders who studied Mexico all year. The seventh-graders took a “virtual trip” to Latin America and displayed their postcards home in the West Room.

The Fiesta raised $500 that was donated to the Diocese of San Vincente in El Salvador for people in need.