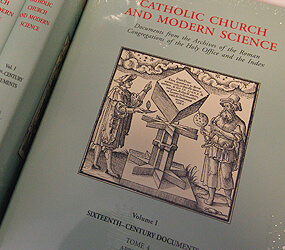 VATICAN CITY – The Roman Inquisition and the Index of Forbidden Books obviously do not represent the brightest chapters in Catholic history, but newly published documents from Vatican archives should help scholars distinguish between the truth and the dark legends.

Hundreds of documents detailing the church’s investigations of individuals and of written works during the Roman Inquisition have been published – most of them for the first time – in a new series released by the Vatican.

Reproducing records from the Inquisition’s activities –records held in the formerly secret archives of the Congregation for the Doctrine of the Faith – the series hopes to shed light on how the Roman Inquisition really worked and to dispel age-old biases.

A lack of access to the archives, which were opened to the public only in 1998, meant some scholars and historians made “sweeping generalizations without sufficient foundation” about the church’s aims during the Inquisition, a former papal theologian wrote in the volume’s preface.

Cardinal Georges Cottier, theologian of the papal household under Pope John Paul II, wrote that by focusing only on cases in which the church acted extremely harshly – such as the condemnation of Galileo Galilei and the burning at the stake of Giordano Bruno, some historians concluded the church was engaged in a vicious war against science.

It is “misleading to see the activity … as a struggle against science undertaken in the name of faith” when the Roman Inquisition actually was concerned more with preventing Protestant ideas from spreading, he wrote.

Released at the Vatican May 12, the first volume represents 13 years of organizing, studying, cataloguing, and then transcribing thousands of documents from the Roman Congregation of the Holy Office, which dealt with individuals suspected of heresy, and the Congregation of the Index of forbidden books, which handled the suppression or correction of written works.

Titled “Catholic Church and Modern Science: Documents from the Archives of the Roman Congregations of the Holy Office and the Index,” the series’ first volume reproduced all the doctrinal congregation’s documents concerning science and natural philosophy from 1542 to 1600.

The volume contains the documents in their original language – Latin – but offers extensive footnotes, summaries and commentary in English by co-authors Ugo Baldini – a history professor at Italy’s Padua University and an expert on Galileo Galilei – and Leen Spruit – an expert on the censorship of science in early modern history.

Spruit told Catholic News Service that the Roman Inquisition did not target science and natural philosophy. Rather, he said, certain individuals and authors were condemned “often for their faith or religious creed.”

A perfect example, he said, is Nicolaus Copernicus, the 16th-century Polish scientist who first proposed in 1543 that the earth revolved around the sun – a theory that would get Galileo in trouble a century later.

Copernicus was virtually ignored by censors until a Protestant wrote about his work and that author was put on the Index, not for supporting heliocentrism, but for being a Protestant, the book said.

Scientific ideas and proposals never mattered to inquisitors unless those theories negatively impacted the church’s religious view of mankind, he said. And then it was the unorthodox anthropology that received condemnation, not the science, he added.

The first and only purely scientific trial the Roman Inquisition pursued was against Galileo, “and I think they consider that now as a very big mistake,” said Spruit.

In addition, scientific works like those written by Copernicus and Galileo were not condemned until they were published in the vernacular rather than in Latin, he said, “because then they could be more dangerous for a broader audience.”

New documents pertaining to Galileo’s trial are to appear in the series’ next volume dealing with the 17th century, which is expected to come out in 2014.

The authors asked what kind of impact the Inquisition had on the scientific community and if it hampered scientific progress.

While the authors didn’t claim to have the answers, they did suggest historians will now be able to make a more honest assessment based on the series’ full reproduction of the archives.

The authors wrote that of the 86 cases handled in the 16th century, the majority of individuals involved were given very lenient sentences and their careers most often continued to thrive.

The Inquisition certainly produced a climate of fear and intimidation, they wrote, but any claim that it was so oppressive that science was stunted “is enormously exaggerated,” Baldini said.

In the authors’ opinion, scientific advancement depends greatly upon economic development and available technology, not just religious or cultural approval.

Also, it was fairly easy to get permission to read a banned book, they wrote, and forbidden books were in wide circulation.

Even though the Roman Inquisition obviously violated many of today’s basic human rights, the inquisitors actually introduced novel juridical procedures that are now fundamental in modern democracies, they wrote.

According to the book’s authors, the Inquisition’s juridical innovations included “the defense attorney, testimony under oath, appeals to a higher court, the adoption of the principle ‘unus testis nullus testis,’“ in which uncorroborated testimony is inadmissible, as well as reducing life sentences to a few years of incarceration and offering a public defender for the poor.