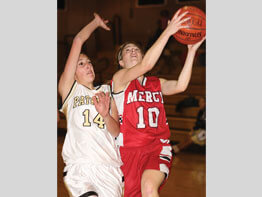 For senior players like Mary McKay and Jordan Bateson, there is little need to explain “The Game.”

For them, the matchup between their respective high schools, Mercy and the Institute of Notre Dame, is the most storied contest in Baltimore basketball.

“No matter how you’re doing that season or what your record is, it’s all about that game,” McKay said. “If you win that game, that’s your season. It’s amazing to be part of all that and representing your school in front of all those people.”

The two seniors will step on the Towson Center floor Jan. 30 in front of a crowd that could approach 4,000 people, for the 43rd edition of the game. School alma maters will be sung before tip-off, and cheerleaders and spirit squads will send fans into their predictable deafening frenzy.

The teams meet twice every season, with one game reserved for a larger venue.

Mercy holds a 26-16 advantage in the series between the two Interscholastic Athletic Association of Maryland A Conference teams.

“Every time I think about it, my heart starts beating fast,” IND’s first-year coach Jeff Hargrave said. “The way it goes is, if you could somehow beat Mercy, you could have the best year ever.”

Once the pre-game pomp and circumstance fades and tip-off arrives, both McKay and Bateson should become central figures in determining the game’s result.

“How many times do you get the chance to play in an arena where 4,000 are cheering you on?” said Bateson, who scored 13 points in a 16-point loss last year. “I’m ready to go out there. It’s a fun rivalry. You want to put on a good show and entertain, because that’s what basketball is all about.”

Even though Mercy dominated the Indians 61-26 earlier this season, Mercy coach Mary Ella Marion says “The Game” guarantees one thing: nothing is easy.

“The records get thrown out the window,” she said. “They play with more confidence. Sometimes, they step out of themselves.”

A parishioner of St. Joseph in Fullerton, McKay grew up watching her sister Erin play for Mercy. Now the Magic’s point guard, she is the proverbial coach on the floor, applying a determination that is unrelenting. With a 22-point lead late against John Carroll Jan. 14, she dove across the floor at mid-court to make a steal.

“It’s constant; it’s unrelenting,” coach Marion said of her captain. “The real satisfaction for me is you can’t tell it in her face if she’s not having a good game. She’s not too high, and she’s not too low. She keeps her emotions in check. She’s really controlling what we do on the floor.”

A member of the National Honor Society and president of the Mercy girls athletic association, McKay keeps busy year-round. She was also captain of the soccer team and runs sprints on the track team. Her experience as a soccer defender taught her to be unselfish with the ball on the court.

“You always want to make the right decision,” McKay said. “If my teammates score or I score, it’s the same feeling afterward. We got a basket out of it. That’s all that really matters.”

Bateson, meanwhile, has proven to be IND’s most versatile player.

Although she says she’s “6-foot on a good day,” the forward can also often handle the ball as a point guard.

“She’s dedicated to the team,” Hargrave said. “She has a great attitude and doesn’t give you any lip.”

Although she earned a reputation as a post player, Bateson said she wants to surprise her opponents on the court.

“I have range,” she said. “I love shooting from the perimeter.”

Marion coached the IND player on an AAU team five years ago. A parishioner of the Cathedral of Mary Our Queen in Homeland, Bateson said her one-time coach helped form her as a player and person.

“She was really intense,” she said. “She’s not yelling at you. She’s yelling for you. She doesn’t go there to lose.”