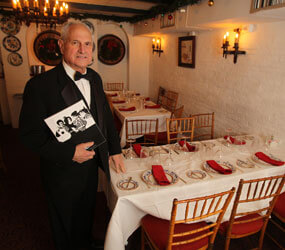 Francisco “Paco” Lobo got up from a seat near Tio Pepe’s bar to walk back to his station in the Mount Vernon restaurant. The longtime maitre d’ was stopped by a customer who came through the doors just as it opened.

The man asked: “Are you the one who’s retiring?

Lobo self-deprecatingly answered with a smile, “I’m not so sure.”

People are starting to notice that Lobo, who emigrated from Spain 45 years ago, is at the restaurant less these days. After 42 years, the parishioner of Immaculate Heart of Mary in Baynesville has gone into pseudo-retirement, scaling back from five days a week to two.

Lobo told The Catholic Review, “I’m 74, and I still love going to work, but how much longer can you go? My boss asked if I would like to come one day or two and I said, “Alright, I’m healthy, I’ll do it.’ It’s very invigorating. I love the job.”

Lobo plans to spend more time with his four grandchildren. The mere mention of them brings a smile to his thin, kind face.

Lobo began working in family restaurants in his home country when he was 17, learning to be precise and professional. Nearly 60 years later, pride defines his work days.

“This is a way of life,” Lobo said. “You get to like it, you keep on going, and you train yourself to aspire to be somebody in the business.”

Lobo arrived in the U.S. in 1964 to work at New York’s World’s Fair through the next year. He was offered a job in the Spanish pavilion. When the fair ended, he and nearly a dozen friends thought about staying in the U.S. He calls his eventual move to Baltimore “fate” or “destiny.”

“I knew the people who used to own it, and we were friends,” Lobo said. “They asked if I would come and join them.”

When he donned his tuxedo for the restaurant, located on Franklin Street, it was impossible to imagine he would remain the first face to greet customers for 40-plus years. The native of Segovia formed a family in the U.S., a place he calls “a great land.”

Tio Pepe’s was a hub of activity for the family. When he married his Chilean wife, Rosa, at Baltimore’s St. Ignatius Church in May of 1971, their reception was held at the restaurant. The couple’s children, Rick and Carolina, each worked at the restaurant at various times.

Family, he said, is the center of his life. Rick and Carolina attended Immaculate Heart of Mary School. Rick went on to Calvert Hall College High School and Carolina to Notre Dame Preparatory School.

Only a stomach bug has kept him away from the restaurant over the years. Blizzards in recent years didn’t deter Lobo from showing up at Tio Pepe’s with his trademark tuxedo.

“I never had a reason to miss work,” Lobo said. “I always wanted to try (to never miss a day). It was a personal challenge.”

Some have compared Lobo to Cal Ripken, the Hall of Fame Baltimore Orioles shortstop who played in 2,632 consecutive games. It makes him laugh.

“It all comes to an end,” Lobo said. “Cal Ripken had to retire too.”