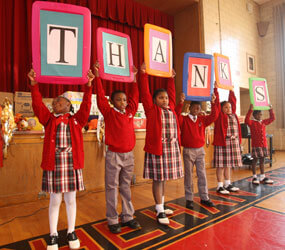 Jamuri Simms and Makalyn George heard the Thanksgiving call to help others and answered.

So did the other 343 students at Baltimore’s Cardinal Shehan School. They were asked to bring in canned goods for a local organization that assists those in need.

“If you were homeless, you wouldn’t like it if no one helped you,” said Makalyn, a third grader.

Oblate Sister of Providence Rita Michelle Proctor, the school’s principal, set a goal of 3,000 cans when the collection was announced in early November. Students asked their parents, neighbors, family and friends for donations. On the day before Thanksgiving, Nov. 24, the school donated 4,036 cans of food to the CARES program in a moving prayer service ceremony. CARES is an outreach of the Govans Ecumenical Development Corporation, and is a food pantry and emergency financial assistance center.

The cans stretched the length of the school’s gymnasium stage during the ceremony, which included songs and Scripture readings from the children.

“We want people who are sick to have a long life and we want them to live as long as they can,” said Jamuri, a second-grader.

The drive became a source of passion for Cardinal Shehan, which is located on the campus of St. Matthew parish in the Northwood community.

“There are many people in the Govans/Loch Raven area who go to CARES twice a week seeking all kinds of assistance, sometimes for help with their rent or gas and electric,” Father Muth said. “You are helping so many people with the generous donations that you give.”

A drawing of a turkey was hung by the school’s entrance and classes added feathers to signify additions. The third grade brought in more than 660 cans.

“We encourage the kids to think about others,” Sister Rita Michelle said. “That has been consistent with Cardinal Shehan for many years. This was a banner year. I’m feeling very proud as principal of the school that we were able to generate that kind of support from our families in these hard economic times.”

“We want people to know we exist,” Sister Rita Michelle said. “We are here, we are proud and we are strong. People have not given up hope. They’re still supporting Catholic education and our children are still doing their part to make our society a better place with their giving efforts.”

The spirit of giving also filled The Catholic High School of Baltimore. The school held a canned food drive to benefit St. Gregory the Great of Baltimore’s food pantry and filled a bus with 28 boxes of goods.